During the early 1990s, economic output declined, while inflation escalated. As a result, the proportion of public revenues in GDP plummeted. Transfers from the former Soviet Union amounting to over 11% of GDP largely created an overall budget surplus equivalent to 4.1% of GDP in 1991. In 1992, parliament agreed to a further tightening of fiscal policy (including decreased expenditures and the elimination of transfers to inefficient state enterprises) due to the virtual termination of in-flowing subsidies caused by the demise of the Soviet Union. The som, currency introduced by the government in May 1993, has proven fairly stable, and monthly inflation has slowed from 40% to about 10%.

The US Central Intelligence Agency (CIA) estimates that in 1999 Kyrgyzstan's central government took in revenues of approximately $207.4 million and had expenditures of $238.7 million. Overall, the government registered a deficit of approximately $31.3 million. External debt totaled $1.6 billion. 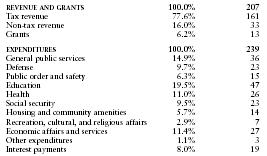