The area of present-day Kyrgyzstan contains evidence of human habitation from the time of the Lower Paleolithic on, approximately 300,000 years ago. Archeologists suggest that two types of economies developed in the territory—farming and pastoral nomadism. By the 7th century BC nomadism had become predominant, and the area was controlled by various tribal alliances. In the north the Saki (7th–3rd centuries BC ) were succeeded by the Usuni (2nd century BC –5th century AD ); in the south the Parkan state (2nd–1st centuries BC ) was replaced by the Kushani kingdom (1st–4th century AD ). The ethnic identity of those peoples is the subject of much debate, but they were not Turkic. From the 6th century on, various Turkic tribes began to push westward, eventually settling most of Central Asia, including Kyrgyzstan. Much of present Kyrgyzstan was united by the 7th century as part of the West Turkic Kaganate, and replaced in the 8th century by the Turgash, who in turn were conquered by the Karluk, who originated in the Altai region further north.

When the present-day Kyrgyz first came to this territory is the subject of much debate. References to tribes of that name living in the Altai occur in the 10th century, but another people with the same name who lived along the Enisei River are first mentioned in records from the 2nd century BC . The Enisei Kyrgyz formed the Kyrgyz Kaganate in about AD 650, which survived until defeat by Genghiz Khan in 1209. Kyrgyz tradition prefers to see its origin in that state, but ethnographers and archeologists view the claim with considerable skepticism.

Evidence suggests instead that the present-day Kyrgyz are an amalgamation of various peoples, as existing tribes incorporated themselves into fresh waves of conquerors. The territory was part of the Karakhanid state from about 950–1150, during which the urban population was actively involved in trade and manufacturing along the Silk Road. Conversion to Islam also began in this period.

Genghiz Khan's Mongols conquered the area in the 13th century, destroying most of the Karakhanid culture and introducing large numbers of new peoples into the area, of Turkic, Mongol, and Tibetan stock. The resulting mix of tribes was almost certainly the basis for the present-day Kyrgyz people, who retain much of the memory of those origins in the orally preserved genealogies of their 40 clans and tribes. The present Kyrgyzstan flag includes the depiction of a sun with one ray for each tribe. The Kyrgyz follow Mongol practice of dividing their people into left ( ong ) and right ( sol ) "wings," said to reflect either the deployment of troops in military formation, or the tribe's original place of habitation. There is also a third group, the ichkilik, that seems to include parts of the Kyrgyz identity.

From the 15th century until the 17th century the Kyrgyz tribes were part of the larger delineation of Central Asian history, which distinguished agricultural sedents from pastoral nomads. The appearance of the same tribal names among Kazakhs, Kyrgyz, and Uzbeks suggests how the people of this territory formed a series of tribal alliances, rather than a true state.

In the 18th century the Kyrgyz began to come under pressure from Mongol tribes farther east. This prompted some of the northern tribes to send delegations to the Russians, who had pushed into Siberia in the 17th century, and who were beginning to take what is now northern Kazakhstan under its control. The Russians made no distinction between the Kazakhs and Kyrgyz, calling both Kyrgyz. The southern Kyrgyz, however, were conquered by the Kokand Khanate, established in the late 18th century, separating them from the northern Kyrgyz. This split between south and north continues to the present day in Kyrgyz life.

Russian expansion into what it called the Steppe included Kyrgyzstan. Most of northern Kyrgyzstan was incorporated into the empire by 1863; the south followed in 1876, when Russia destroyed the Kokand Khanate. Administratively, present-day Kyrgyzstan was split among four guberniias. Beginning in the 1890s Russia settled Russian and other European farmers into the fertile river valleys of the north, forcing Kyrgyz nomads higher into the mountains. 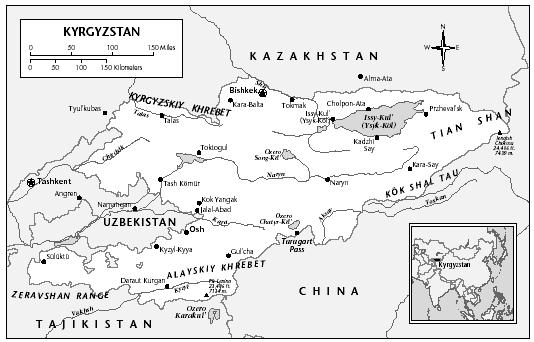 By 1916, Russia's policies of livestock requisition and land use had left the Kyrgyz badly impoverished. When Russia attempted to issue a draft call-up for Central Asian males, including the Kyrgyz, widespread fighting broke out all across the territory. The uprisings were suppressed, with great loss of life; population in the northern part dropped as much as 40%. Since independence in 1991, the state has commemorated the 1916 uprising as a genocide.

Hostility to the tsars meant that there was some support for the Bolsheviks, at least until it became clear that Lenin was not going to encourage the development of national states. Resistance to the Russians continued sporadically until the mid-1920s, in what Russian historians have labeled the Basmachi Rebellion.

The republic was regarded as one of the least developed of the Soviet states, politically and economically. Thus, it came as a great surprise when, on 28 October 1990, Kyrgyzstan became the first Soviet republic to select its own leader. The Kyrgyzstan legislature refused to ratify Communist Party leader Absamat Masaliyev's bid to become the republic's president, and elected instead Askar Akayev, president of the republic's Academy of Science. Akayev and his supporters began asserting Kyrgyz nationalism and wresting political and economic control over the republic from the Soviet Communist Party. These efforts were briefly interrupted by an attempted coup in Moscow by Communist Party hard-liners in August 1991. Akayev bravely condemned the coup and, after it fizzled, on 30 August 1991 he severed ties with the Communist Party and Kyrgyzstan declared its independence. On 12 October 1991, Akayev's presidency was confirmed by direct popular election.

A constitution was adopted on 5 May 1993. An economic and political crisis led to the resignation of the first government in December 1993, but Akayev's presidency was reaffirmed by a popular referendum of support conducted on 30 January 1994. Over 95% of registered voters participated in the referendum; 97% of those who voted supported President Akayev.

In September 1995, Akayev's supporters submitted a petition signed by 1.2 million (52% of the voting age population) urging the legislature to approve a referendum extending Akayev's term to the year 2001. After contentious debate, the legislature rejected holding a referendum, and Akayev instead announced that a presidential election would be held on 24 December 1995. Thirteen candidates were registered, but ten were disqualified, leaving Akayev, Masaliyev, and former speaker Medetken Sherimkulov. Akayev won reelection to a five year term, receiving 72% of about 1.9 million votes in a race deemed generally "free and fair" by international observers, though questions were raised about the disqualifications. In July 1998, Akayev hailed a Constitutional Court decision permitting him to run for a third term in the year 2000. He was reelected president on 29 October 2000, with 74% of the vote in an election marred by serious irregularities. Opposition activity prior to the election had been severely curtailed.

Severely shaking Kyrgyzstan's stability, several hundred Islamic extremists and other guerrillas entered Kyrgyzstan from Tajikistan in July–August 1999. The guerrillas seized hostages, including four Japanese geologists, and several Kyrgyz villages, stating that they would cease hostilities if Kyrgyzstan provided a safe haven for refugees and would release hostages if Uzbekistan released jailed extremists. The guerrillas were rumored to be seeking to create an Islamic state in south Kyrgyzstan as a springboard for a jihad in Uzbekistan. A Kyrgyz Security Council member in October 1999 alleged that the guerrillas were trying to seize the major drug trafficking route in southern Kyrgyzstan. Kyrgyzstan called out reservists and admitted that its military was unprepared for combat. Kyrgyzstan received air support from Uzbekistan and Kazakhstan, but protested Uzbek bombing of a Kyrgyz village. The Kyrgyz defense minister on 18 October 1999 announced success in forcing virtually all guerrillas back into Tajikistan.

The United States established a major airbase near Bishkek in December 2001 for military and humanitarian uses during its campaign in Afghanistan to oust the Taliban regime and al-Qaeda forces there. Kyrgyzstan and the United States have established closer political and security ties since 11 September 2001. At US prompting, the IMF reached agreement with Kyrgyzstan on a $93 million loan in December 2001. Since 11 September, all radical Islamic groups in the Central Asian nations have been linked with international terrorism. Both the Hizb-ut-Tahrir ("Freedom Party") and the Islamic Movement of Uzbekistan (IMU), two radical Islamic organizations looking to establish an Islamic state in Central Asia, have a strong presence in the country. The IMU, expelled from its own country, collaborated with the Taliban and al-Qaeda and led armed incursions into Kyrgyzstan. Following the anti-terrorist operations led by the United States after 11 September, all major units of the IMU were destroyed.

In January 2002, Legislative Assembly member and opposition leader Azimbek Beknazarov was detained on charges which supporters said were politically motivated and linked to his criticism of the government's planned transfer of disputed land to China and Kazakhstan. In February, Sherali Azarkulov, a prominent human rights activist, died while on a hunger strike to protest Beknazarov's detention. In March, five people were killed in the southern Aksy rayon in clashes with police during a protest demanding Beknazarov's release, and in May, the government resigned after a state commission ruled that senior officials were to blame for the deaths of the protestors. Beknazarov was subsequently freed, after being given a one-year suspended sentence for abuse of office. A rally in June called for Akayev's resignation, increasing fears of political instability and civil war. Large protests and arrests continued throughout the year. In January 2003, Akayev announced a referendum would be held on his presidency and on amendments to the constitution to "improve democracy." On 2 February, 76.6% of Kyrgyz citizens supported the amendments in the referendum, and 78.7% of voters determined Akayev should remain in office until his term expired in December 2005.

In October 2002, Kyrgyzstan and China staged their first joint military exercises, aiming to coordinate their response to terrorism.