Much of the recent improvement in public finances is the result of higher oil prices and production, rather than government reforms. In 1994, the Kuwaiti government began to consider various austerity measures, which became a source of debate in parliament. Several plans in discussion call for reductions in government subsidies and welfare benefits, increases in taxes, privatization of state-owned businesses, and banking sector reforms. Subsidies are one of the most contentious and politicized austerity measures; in 1995, the Ministry of Finance stated that the country annually spends $1.8 billion on utility subsidies and free health care. The Kuwaiti cabinet passed a reform package in 1999, including a reduction in subsidies and increasing taxes on luxury goods. A government surplus of about 15% if GDP in 2000 was reduced to a deficit of over 2% in 2001 as a result of soft world oil prices.

The US Central Intelligence Agency (CIA) estimates that in 2001/2002 Kuwait's central government took in revenues of approximately $11.5 billion and had expenditures of $17.2 billion. Overall, the government registered a deficit of approximately $5.7 billion. External debt totaled $6.9 billion. 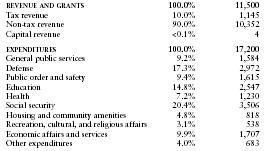