The historical records of the Arab coast of the Persian Gulf are meager. Archaeological discoveries on Faylakah Island reveal an ancient civilization about 2800 BC that had trade links with the Sumerians. By the 6th century BC , this part of the Gulf was a principal supply route for trade with India. There is evidence of early migrations to the East African coast by the seafaring inhabitants. The historical turning point for the entire Arabian Peninsula was the conversion of the people to Islam in the 7th century AD , during the lifetime of Muhammad.

Kuwait's recent history starts in 1716, when several clans of the tribe of Aniza migrated from the interior of the Arabian Desert to a tiny Gulf coastal locality, later to be called Kuwait (a diminutive of the word kut, meaning "fort"). In 1756, the settled tribesmen rallied around the As-Sabah family and chose as their ruler Sheikh Sabah 'Abd ar-Rahim, founder of the present ruling dynasty. During the latter part of the century, raids by land and by sea resulted in the decline of Kuwait, but after the British suppression of piracy in the region, trading and shipbuilding prospered.

During the period in which Sheikh 'Abdallah as-Sabah ruled Kuwait (1866–92), a dynastic battle raged in Arabia between the rival houses of Ar-Rashid and As-Sa'ud. The Ottoman Turks, supporting Ibn Rashid, sought to extend their control over the coastal area to the south of Kuwait. Fearing that his territory would be lost to the Turks which considered it part of their province of Basra, Sheikh Mubarak as-Sabah (r.1896–1915) asked to be taken under British protection. The British were concerned not only because of the Turkish claims but also because the Russians were seeking to set up a coaling station in Kuwait, and both the Germans and the Turks had planned to 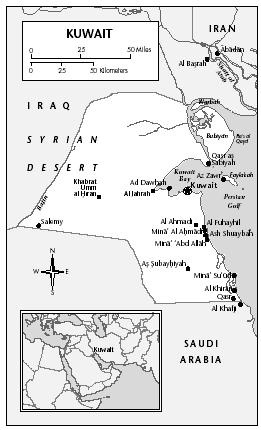 make it a terminus of the Berlin–Baghdad railroad. In 1899, Sheikh Mubarak agreed not to alienate any of his territory or to receive representatives of any foreign power without British consent. In return, the British offered their services as well as an annual subsidy to support the sheikh and his heirs.

On 19 June 1961, the protective treaty relations with the United Kingdom were terminated by mutual consent, and Kuwait declared itself fully sovereign and independent. By this time, the sheikhdom had already become a major oil producer and had acquired a controlling interest in the petroleum industry. Iraq refused to recognize Kuwait's independence, asserting it had inherited the Ottoman claim to the territory. Baghdad's threat of an invasion was foiled by the dispatch of British troops and later the support for Kuwait of the Arab League. Iraq then appeared to acquiesce in Kuwait's sovereignty, although border issues were never definitely resolved. During the next two decades, Kuwait succeeded in establishing an open and prosperous economy, based in large part on foreign, especially Palestinian and Egyptian, labor.

During the Iran-Iraq War, Kuwait, albeit technically neutral, rendered important assistance to Baghdad, including the transshipment of goods and the provision of over $6 billion in loans. As a response, members of Kuwait's large Shi'a minority and other radical dissidents waged a war of terrorism against the government. Throughout the 1980s, there were bombings, assassination attempts, hijackings, and sabotage against oil facilities.

In 1987, Iranian attacks on Persian Gulf shipping led Kuwait to request US protection for its supertankers. Washington agreed and when a "reflagged" Kuwaiti vessel was attacked, American forces retaliated against an Iranian offshore oil rig.

With the end of the war, Iraq-Kuwait relations were stable until 1990 when Saddam Hussein accused his neighbor of waging economic warfare against Iraq by illegally drilling oil from the shared Rumailia field, overproducing oil to drive down prices and unfairly demanding repayment of wartime loans. Tensions could not be defused by negotiations or mediation and on 2 August 1990, Iraqi forces invaded Kuwait, asserting that they were rightfully reclaiming their territory. Kuwaiti defense forces offered little resistance and most senior officials fled the country.

The United States led an international coalition of Arab and other nations to demand the withdrawal of Iraqi forces. After a lengthy buildup of forces, Iraq was assaulted by massive air and land forces; after six weeks, its defenses collapsed and Kuwait was liberated in February 1991. Kuwait's leaders returned to find a disgruntled population that resented their abandonment and demanded greater political participation. Enormous physical damage had been inflicted on the country, including over 700 oil well fires that did serious ecological damage before being extinguished after almost nine months' effort.

The regime, and many Kuwaitis, turned harshly against those suspected of collaboration with Iraq. As a consequence, much of the large Palestinian community was ejected from the country.

Relations with Iraq naturally remained tense, with some Baghdad officials continuing to assert their claim to Kuwait. On 27 May 1993, the UN Security Council reaffirmed the decision of a Boundary Demarcation Commission establishing the border between the two nations. Kuwait's vulnerability to possible attack from Iraq or Iran drew the nation closer to the United States, which has been willing to offer enhanced security collaboration.

In October 1994, Iraq began moving 60,000 troops to within 32 km (20 mi) of the Kuwaiti border. The UN Security Council voted unanimously to condemn Iraq's actions, and the United States, the United Kingdom, and other countries came to Kuwait's assistance. Kuwait agreed to allow the United States to station a squadron of 24 warplanes there as part of a broad effort to curb Iraqi military power. The plan kept reserves of American warplanes and a division's worth of tanks and armor stationed in the region. On 10 November 1994 Iraq agreed to recognize the independence and current borders of Kuwait, a major step apparently aimed at allowing at least some UN sanctions against Iraq to be lifted. However, in August 1995, Iraqi troop movements along the Kuwaiti border caused alarm again, and the United States began sending ships carrying equipment and supplies to the Persian Gulf. In April 1996, an international military exercise (involving forces of the United States, the United Kingdom, Russia, China, Italy, and other Arab nations) was held in Kuwait. The UN also renewed its multinational force of border observers in April 1996 to oversee the 14-km (9-mi) demilitarized zone that separates Kuwait from Iraq.

Although some of its neighbors in the Persian Gulf began to pursue a rapprochement with Iraq over the following years, Kuwait maintained its vigilance against the regime of Saddam Hussein. Early in 1998 it granted expanded staging areas to the United States in anticipation of possible military action in response to Iraq's failure to cooperate with UN weapons inspections. At the end of 1998 it supported NATO air strikes against Iraq over the same issue. In January 1999, Kuwait placed its military on full alert in response to renewed threats from Iraq. As of 2000, a special UN commission had awarded $15.7 billion in reparations for damages suffered in Iraq's 1990 invasion of Kuwait. In January 2003, Iraqi and Kuwaiti officials resumed talks on the fate of people who went missing during the Iraqi occupation of Kuwait in 1990–91. Kuwait claims Iraq must account for more than 600 Kuwaitis who disappeared during the occupation. Iraq insists it holds no such detainees, and accuses Kuwait of failing to account for more than 1,000 Iraqis.

On 8 November 2002, the UN Security Council passed Resolution 1441, calling on Iraq to disarm itself immediately of weapons of mass destruction (chemical, biological, and nuclear weapons), to abide by all former UN resolutions regarding the country since the end of the 1991 Gulf War, and to allow for the reintroduction of UN and IAEA weapons inspectors (they were expelled from the country in 1998). The United States adopted a firm position toward Iraq's disarmament, which it disputed, and by March 2003, was preparing for war. Since Kuwait's liberation from Iraq in 1991, it became the world's largest per capita defense spender. As of 2003, Kuwait had purchased Patriot anti-missile batteries, F/A-18 warplanes, and Apache attack helicopters for a military force estimated at 15,500, with 23,700 in reserves. However, Kuwait was not expected to take part in the expected US-led invasion of Iraq; instead, its forces were to defend the country from retaliation or other form of attack by Iraq. By early March 2003, nearly 140,000 US and British military personnel had arrived in Kuwait.

On 21 January 2003, a civilian contractor for the US military was killed and another wounded when their car was fired upon outside Kuwait City. A Kuwaiti man was arrested and claimed responsibility for the shooting, expressing support for Osama bin-Laden's al-Qaeda organization. Kuwait is concerned with a rise in Islamic fundamentalism and anti-American sentiment.

On 19 March 2003, the United States launched air strikes on Baghdad, and the war in Iraq began. Iraq fired a number of missiles at Kuwait, and one struck a mall in Kuwait City, but resulted in no deaths. Most of the missiles were destroyed by defensive Patriot missiles. The regime of Saddam Hussein was toppled on 9 April, and the military stage of the war ended soon after. Plans for the reconstruction of Iraq and for the establishment of a legitimate government were in the making in April, but it was acknowledged such progress could take years.

In May 1999, the emir of Kuwait dissolved the National Assembly in the wake of a long-standing political deadlock between government and opposition forces. However, the opposition gained even more ground in national elections held in July, with both Islamists and liberals gaining addition seats. Among the matters awaiting parliamentary consideration was a controversial decree by the emir that would allow women to vote and run for office by the next election, scheduled for 2003. Parliament on 23 November 1999 voted against the emir's decree to grant full political rights to women.