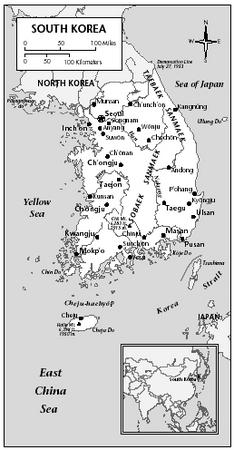 There were 102 airports in 2001, 69 of which had paved runways. Major airports include Cheju International at Cheju, Kimhae International at Pusan, and Kimpo International at Seoul. Civil aviation in the ROK in 2001 amounted to 6,957 million freight ton-km (4,323 million freight ton-mi) of service and 32,638,200 passengers were carried on scheduled domestic and international flights. Korean Air Lines (KAL), privately owned since 1969, grew rapidly during the 1970s and now ranks as a major world carrier. On the morning of 1 September 1983, a KAL jetliner en route from New York to Seoul via Anchorage, Alaska, strayed over airspace of the former USSR and was shot down by Soviet interceptors, reportedly because they thought it was a military aircraft engaged in espionage; all 269 persons on board were killed, and worldwide protest followed. In November 1983, 115 people were killed when a bomb was apparently detonated aboard a KAL jet en route to Seoul.