The main wave of Micronesian settlement is thought to have come from Samoa in the 13th century, but Gilbertese tradition suggests that the Samoans were not the first settlers. European discovery dates from 1537, when Christmas Island was sighted by Spanish explorers. The English sea captain James Cook encountered the islands in 1777, and commercial activities in the region began early in the 19th century. The Gilbert Islands were a favorite whaling ground, and deserting crews began to settle in the islands in the 1830s. Trading ships were calling there regularly by the 1850s, and a flourishing copra and coconut trade was established by the 1860s, as well as an illicit human traffic. The Office of British High Commissioner to the Western Pacific was created in 1877 to help suppress abuses by recruiting ships seeking labor for overseas service. In 1888, Christmas, Fanning (now Tabuaeran), and Washington (now Teraina) islands were annexed by the British, and Phoenix Island was placed under their protection. A declaration of a British protectorate over the Gilbert and Ellice groups followed in 1892. A handful of administrators established local native governments, and a period of stability ensued.

Ocean Island was annexed by Britain in 1900, following Sir Albert Ellis's discovery of its valuable phosphate deposits. The Gilbert and Ellice groups (including Ocean, Fanning, and Washington islands) were declared a British colony in 1916. British control was extended to Christmas Island in 1919 and to the uninhabited Phoenix group in 1937, but after the United States laid claim to Canton and Enderbury, a joint British-American administration over these islands was established. During World War II, the Gilberts were occupied by Japanese forces until 1943, when the invaders were driven out by US forces, after heavy casualties on both sides. Ocean Island was liberated by the Australians in 1945.

In a 1974 referendum, the Ellice Islands voted for separation, subsequently becoming the independent nation of Tuvalu. Internal self-government for the Gilberts was established as of 1 January 1977, and the islands became the independent Republic of Kiribati on 12 July 1979. In September, the new nation signed a treaty of friendship with the United States (ratified by the US Senate in 1983), by which the United States relinquished its claims to the Line and Phoenix groups (including Canton, Enderbury, and Malden).

Ieremia Tabai, chief minister at the time of independence, became president of the new republic in 1979 and was reelected 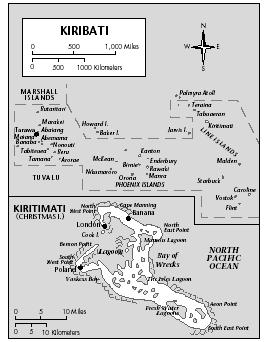 in May 1982 and February 1983. Although the constitution limits a president to three terms, Tabai argued that he had not completed three full terms and was reelected in May 1987. In 1991, Tabai stepped down and was replaced by Teatao Teannaki, head of the National Progressive Party. Teannaki served until 1994, when Teburoro Tito, head of the nation's first real political party, the Maneaban Te Mauri Party (MTM), was elected. The MTM won 19 of 39 seats in the House.

A special problem was posed by the Banabans, who were resettled in 1946 on Rabi (Fiji)—bought for them by means of phosphate royalties—so that strip mining on their native island could continue unimpeded. In 1975, the Banabans sued, petitioning the British courts for damages. After a lengthy legal battle, representatives of the Banabans (most of whom still reside on Rabi) agreed in 1981 to the creation of a trust fund of nearly A $15 million for Banaban development. Recognition of Banaban minority rights is enshrined in Kiribati's constitution. Kiribati established diplomatic relations with the former Soviet Union in 1979 and with the People's Republic of China in 1980.

Kiribati opposes French nuclear testing in the Pacific and signed the 1985 Raratonga Agreement declaring the South Pacific a nuclear-weapons-free zone. In 1985, Kiribati signed a one-year fishing agreement with the former USSR that aroused controversy at home and abroad. The agreement was not renewed after talks for its renegotiation broke off in September 1986.

Kiribati began resettling more than 4,700 people on outlying atolls in August 1988 in an attempt to relieve overcrowded conditions on the Tarawa atolls. In September 1988 Kiribati ratified the South Pacific Regional Fisheries Treaty, which permits US tuna ships to operate within its 200-mile exclusive zone. In early 1992 the Parliament of Kiribati instructed the government (against its wishes) to seek compensation from the United States for damage done to the country during the Pacific War, 1941–45.

In 1994 the government of Kiribati underwent a constitutional crisis when President Teatao Teannaki was forced to resign following a no-confidence vote by the opposition in parliament, who had charged him with misusing travel funds. As specified in the constitution, executive authority was then transferred to a Council of State until new parliamentary and presidential elections could be held, but one member of the council refused to resign when his term expired and had to be forcibly removed, prompting calls for constitutional reform to prevent a similar situation from occurring in the future. Teburoro Tito was elected president in September, and elected to a second term in November 1998.

Together with Nauru and Tonga, Kiribati was admitted to the United Nations in 1999. In March of that year, the government declared a state of emergency as water shortages reached crisis levels due to an extended drought and pollution of the available water supply. Long-term elevation of the surrounding sea level due to global greenhouse emissions remains a serious concern for Kiribati, which reportedly has already lost two uninhabited islands and been forced to move segments of its population inland, away from coastal regions.

The 2002 presidential election process began with a general election for parliament on 29 November, but several rounds of voting took place before the election of a president on 25 February 2003. During the 29 November election, Harry Tong, a member of the opposition, won his seat in parliament and the right to stand as candidate for the presidency. Tito's party lost 14 of its 25 seats in the election, and was forced into a run-off election. Parliament could not meet until 6 January 2003, and that led to a delay in the presidential election scheduled to take place on 31 January 2003; it was postponed until 25 February. In January 2003, opposition parliamentarians named Taberannang Timeon to stand against Tito in the February election, instead of Tong. Tong had stepped aside in order not to split the opposition vote against Tito. Bakeua Bakeua Tekita stood as a third candidate. Tito narrowly won the 25 February election, defeating Timeon by only 547 votes.