Continued deficits in the trade balance are often met by grants from the UK to the government's current and capital accounts. Foreign aid, in fact, accounts for between 25% and 50% of GDP.

The US Central Intelligence Agency (CIA) reports that in 1998 the purchasing power parity of Kiribati's exports was US $6 million while imports totaled US $44 million resulting in a trade deficit of US $38 million.

The International Monetary Fund (IMF) reports that in 1994 Kiribati had exports of goods totaling US $6 million and imports totaling US $27 million. The services credit totaled US $18 million and debit US $17 million. The following table summarizes Kiribati's balance of payments as reported by the IMF for 1994 in millions of US dollars. 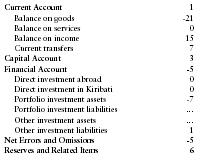