The US Central Intelligence Agency (CIA) estimates that in 2001 Kazakhstan's central government took in revenues of approximately $4.2 billion and had expenditures of $5.1 billion. Overall, the government registered a deficit of approximately $900 million. External debt totaled $11.6 billion. 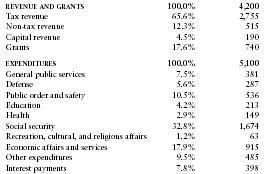