Jordan has had to rely on foreign assistance for support of its budget, which has increased rapidly since the 1967 war. During the late 1980s, Jordan incurred large fiscal deficits, which led to a heavy burden of external debt. Efforts at cutting public expenditures reduced the budget deficit from 21% of GDP in 1989 to 18% in 1991. The Persian Gulf War, however, forced Jordan to delay the IMF deficit reduction program begun in 1989. 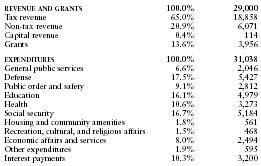