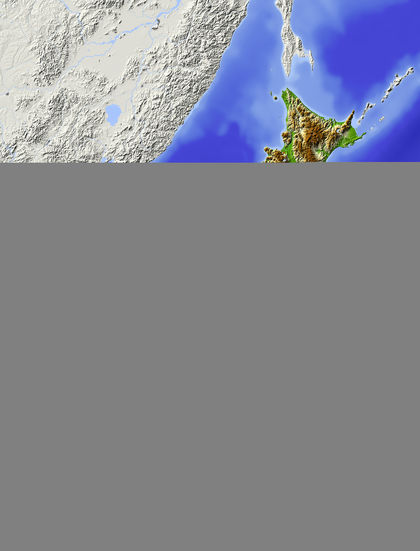 The Japanese islands are the upper portions of vast mountains belonging to what is sometimes called the Circum-Pacific Ring of Fire, which stretches from Southeast Asia to the Aleutian Islands. Mountains cover over 75% of the land's surface. Landforms are steep and rugged, indicating that, geologically speaking, Japan is still a young area. Through the central part of Honshu, running in a north–south direction, are the two principal mountain ranges: the Hida (or Japan Alps) and the Akaishi mountains. There are 25 mountains with peaks of over 3,000 m (9,800 ft). The highest is the beautiful Mt. Fuji (Fuji-san), at 3,776 m (12,388 ft). Japan has 265 volcanoes (including the dormant Mt. Fuji), of which about 20 remain active. Earthquakes occur continually, with an average of 1,500 minor shocks per year. One of the world's greatest recorded natural disasters was the Kanto earthquake of 1923, when the Tokyo-Yokohama area was devastated and upward of 99,000 persons died.

The plains of Japan are few and small and cover only about 29% of the total land area. Most plains are located along the seacoast and are composed of alluvial lowlands, diluvial uplands, and low hills. The largest is the Kanto Plain (Tokyo Bay region), about 6,500 sq km (2,500 sq mi). Others include the Kinai Plain (Osaka-Kyoto), Nobi (Nagoya), Echigo (north-central Honshu), and Sendai (northeastern Honshu). There are four small plains in Hokkaido. The population is heavily concentrated in these limited flat areas.

Rivers tend to be short and swift. The longest is the Shinano (367 km/228 mi) in north-central Honshu, flowing into the Sea of Japan / East Sea. The largest lake is Lake Biwa, near Kyoto, with an area of 672 sq km (259 sq mi). Lake Kussharo, in the Akan National Park of Hokkaido, is considered the clearest lake in the world, having a transparency of 41 m (135 ft). Good harbors are limited because in most areas the land rises steeply out of the sea.Yokohama, Nagoya, and Kobe are Japan's most prominent harbors.

The Ryukyu Islands, among which Okinawa predominates, are the peaks of submerged mountain ranges. They are generally hilly or mountainous, with small alluvial plains.

Just wanted to thank you for writing this page =] it was very helpful and informative. Didn't want your work to go unnoticed.
2
kody&brook

thankyou so much, i couldn't find anything useful on Japan's topography, and i was close to despair when you're site came up. thanks again, you've done a fantastic job and i would definately reccomend this site to anyone looking for decent information :) :)
4
piyush

wow thanks so much!
really helpful ^^
i was having a lot of trouble finding a good site with lots of topography info
this was exactly what i needed :]
6
Rachel

Thanks for getting my research paper started I'll have an A for sure! (If I get the citations right :P)
8
priyanka

this was very useful because i need info on this for my homework and i got everything i need for. I would point this site out for anybody who needs it.
10
Jade

Thanks so much! I needed this. I couldn't find anything until this popped up. (:
11
Kyle

This was an excellent source to find that extra information I needed for my geography vignette.
12
aysha

Very good! Lots of information for my project! I think that maybe you could have a bit more information but still very well written!
15
mitzey man

well, it is pretty darn good, it really helped me out on my Japanese project!
16
A random kid

It helped me on my project as well. Apparently I have to use 50 characters or more so I am using the space by saying so.
17
soccer lover

it helped a lot :)
the information was fantastic keep it up
19
that one guy

Quite nice. Barely anything else this detailed comes up on the topography of Japan. Thanks!!!
20
Rajanish

It is so helpful for us . For the general information . And it's help me into my work .
21
Reinchott

Thank you so much for this. It was really useful for my social studies project!