Telephone and telegraph services are offered by Nippon Telephone and Telegraph, which was privatized in 1986, and by Japan Telecom and other companies that entered the market after Nippon Telegraph and Telephone's monopoly ended in 1985. In 1997, Japan had 60.3 million mainline telephones. In 2000, there were an additional 63.8 million cellular phones in use nationwide. Telex, fax, and international telegram services are provided by Kokusai Denshin–Denwa (KDD).

A semigovernmental enterprise, the Japan Broadcasting Corp. (Nihon Hoso Kyokai—NHK), plays a large role in Japan's radio and television communications. Many commercial stations are connected with large newspaper companies. Started in 1935, Radio Japan is also beamed by NHK throughout the world. NHK initiated television broadcasting in 1953. As of 2001 there were 215 AM and 89 FM radio stations. In 1999, there were 211 television stations. Color television broadcasting began in 1960; multiplex broadcasting, for stereophonic or multiple-language programming, was made available in Tokyo and other metropolitan areas in 1978. In 2000, there were 956 radios and 725 television sets for every 1,000 people. With about 315 personal computers in use for every 1,000 people, Internet access was available from 73 service providers in 2000. By 2001, there were 47.08 million Internet subscribers.

The Japanese press is among the world's largest in terms of newspaper circulation and is also a leader in ratio of copies to population.

The leading Japanese dailies, with their 2002 circulations, are as follows: 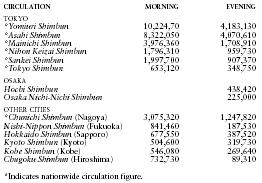 There are two domestic news agencies: the Kyodo News Service, with 50 domestic bureaus and with foreign bureaus in every major overseas news center; and the Jiji Press, serving commercial and government circles.

The constitution of Japan provides for free speech and a free press, and the government is said to respect these rights in practice. The Japanese press enjoys the reputation of having the most vigorous and outspoken in the world. It operates under the constitutional provision of absolute prohibition of censorship.