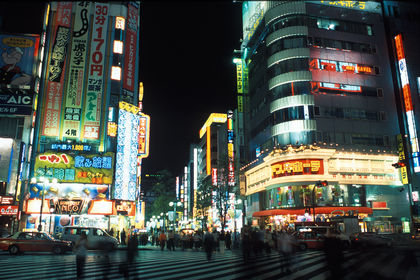 Of the thousands of lesser islands, four are of significance: Tsushima, in the straits between Korea and Japan; Amami Oshima, of the northern Ryukyu Islands at the southern end of the Japanese archipelago; Sado Island in the Sea of Japan / East Sea off central Honshu; and Awaji Island, lying between Shikoku and Honshu. Two groups of islands returned to Japan by the United States in 1968 are located some 1,300 km (800 mi) due east of the Ryukyus: the Ogasawara (Bonin) Islands, about 885 km (550 mi) south of Tokyo, and the Kazan (Volcano) Islands, directly south of the Ogasawara group.

Japan's principal island is Honshu, on which are located the capital city of Tokyo, the principal cities and plains, and the major industrial areas. This island is divided into five regions: Tohoku, from north of Kanto to Tsugaru Strait; Kanto, embracing seven prefectures in the Tokyo-Yokohama region; the Chubu, or central, region, from west of Tokyo to the Nagoya area; Kinki, including the important cities of Kyoto, Osaka, Kobe, and Nara; and Chugoku, a narrow peninsula thrusting westward from Kinki between the Sea of Japan / East Sea and the Inland Sea, which lies between southern Honshu and the island of Shikoku.

The Japanese government maintains that the Habomai island group and Shikotan, lying just off Hokkaido and constituting fringe areas of the Kurils, belong to Japan and should be returned to Japanese administration. These islands and the Kuril Islands are currently occupied by Russia, whose claims are not formally recognized by Japan.

Japan's capital city, Tokyo, is located on the east coast of the island of Honshu.

I love this artical. It has heaps of info. thats why i like it.
can you please give me it for amy other countries that you have
2
hels bels and han han

very interesting document we found that the information was very helpful.
3
Randomer11

thanks guys this artical rearly helped me with my homework :)
4
riley

This is a good web site. It helped me with my report. Thanks
6
william

Thanks u helped me with my japan project at school. U saved me alot of time.
7
daniel

thanks guys, whoever made this. This helped me do a big part of my homework.XD
8
Amber

Thanks.
I needed this info for a japan assignment.
9
Anon

the information used in this report was extremely detailed. well done on the research of this article and straining of any useless information.
10
jake

this website is very helpful for my schol projeks thanks :P
11
Vutha

thanks so much, you saved my life! it is great info!
13
Josie

this is a great website. you helped me with my japan project.
16
Alizae

This website really helped me with my report. Thank You for all the good information that this website provides users with. And I actually think that these facts are really reliable. Thank You.
17
pork

thank you alot that helping me to do my assignment,ok good bye !
18
jim

I am doing a report and it totally helped me pass it!! I love this website!!
19
tara

Thanks guyz.this is good site to help me for stady .and may report
20
Ta ti

Thnx for all the info! :) i really needed it for my project at school!

thanks for making this. this helps me to do my homework
22
brandon berry

Thanks for all the help on my project in social studies class it helped B).
23
kai j

Awesome, getting over with my Japan project. :) almost done and my teacher is wondering where I'm getting my info...
25
Abhijit Hazra

This is a very useful web.Thank for detail information.
26
_SOMEONEOBVIOUSLYAMAZING_

Thank you so much to the people or person who made this article. It was extremely helpful and I enjoyed reading the well documented info.
Thanks again
27
Tabby

thanks! this really helped me with a huge paper for school! =3
28
In-4-Mation

It's helpful but it could've been set out better.
Keep trying though! Good job!
29
Harper

Thanks this was so helpful with on of my school projects about Japan. Thanks! :3
30
Sara

Very helpful! Thanks to whoever made this. I need it to do my homework
31
Michael

This was helpful for me to understand the distance of Japan.
32
albert hill

Excellent info. Drive me to look up Russian occupation and get idea of size and visualize # s in covid outbreak . Thanls alhill
33
Kacarinmotochi

I really liked the article but it should have had pictures and a tutorial for an indebted view of it.