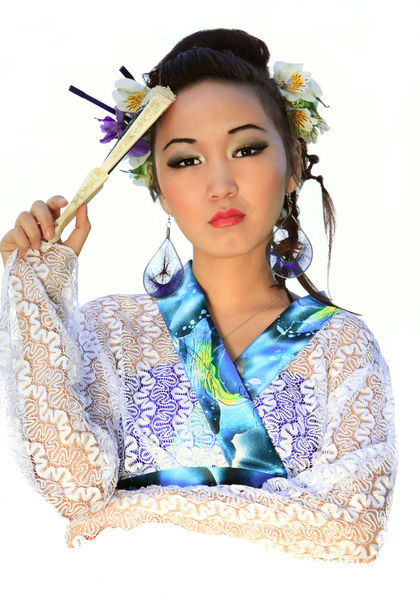 In 1999, 99.4% of the population was Japanese while only 0.6% belonged to other ethnic groups (mostly Korean). Although it is known that the Japanese are descended from many varied peoples of Asia, there is no agreement as to origins or specific ethnic strains. In physical characteristics, the Japanese belong to the Mongoloid group, with faint admixtures of Malayan and Caucasoid strains. Waves of migration from the continental hinterland reached Japan during the end of the Paleolithic period, blending into a complicated and diverse ethnic, linguistic, and cultural system. It is believed that the Japanese have their roots in the Old Stone Age race of at least 30,000 BC . A major migration appears to have taken place in the second and third centuries AD , and by the fourth century this group, called the Yamato clan, had established a monarchy in the present Nara prefecture. Other ethnic strains may have come from Indonesia and China in the south, Korea in the west, and Siberia and Alaska in the north.

The one remaining distinct ethnic group in Japan is the Ainu. These people, living on the northern island of Hokkaido, are physically distinct from the contemporary Japanese, having Nordic-like features, including more pervasive facial and body hair. There is no agreement as to their origins; their current population is less than 20,000.

Great job.
This information was very usefull
Thanks¡
2
Andrea

Thanks for the info.
I take it very time friendly when you're close to a dead-line. ^-^
3
rocky

Thanks for the info it waz super helpful for my s.s. power point i have too do on japan
5
james

Thank you thank you:) this really helped with my presentation for Global Studies, peace and love.
6
bailey

THANKS A REALLY LOT I NEEDED THIS FOR A SOCIAL STUDIES CLASS.
8
Miranda

THANKS FOR ALL YOUR HELP I APPRECIATE IT.i NEEDE IT FOR A SOCIAL STUDIES PROJECT ON CULTURE AND ETHNIC GROUPS IS ONE OF THEM.
9
Miranda

THANKS FOR ALL YOUR HELP I APPRECIATE IT. I NEEDED IT FOR A SOCIAL STUDIES PROJECT ON CULTURE. ETHNIC GROUPS IS ONE OF THEM.AND ABBY IS MY BFF.
10
Connor

Thanks! I'm doing this huge project for my World Geography class and it's a major grade. It's on Japan and this helped a lot. Thanks again!
11
Zach

Thank You so much! This was a really big help to me, my social studies powerpoint is due tomorrow and i just started it!
Like Rocky said, this is focusing more on Japan than Tokyo
All in all, Great Job!