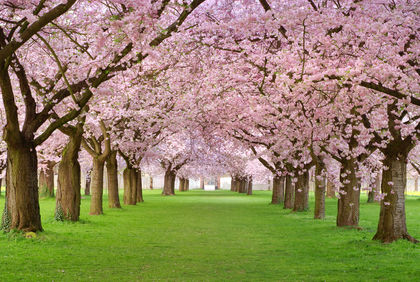 Japan is located at the northeastern edge of the Asian monsoon climate belt, which brings much rain to the country. The weather is under the dual influence of the Siberian weather system and the patterns of the southern Pacific; it is affected by the Japan Current (Kuroshio), a warm stream that flows from the southern Pacific along much of Japan's Pacific coast, producing a milder and more temperate climate than is found at comparable latitudes elsewhere. Northern Japan is affected by the Kuril Current (Oyashio), a cold stream flowing along the eastern coasts of Hokkaido and northern Honshu. The junction of the two currents is a bountiful fishing area. The Tsushima Current, an offshoot of the Japan Current, transports warm water northward into the Sea of Japan / East Sea.

Throughout the year, there is fairly high humidity, with average rainfall ranging by area from 100 cm to over 250 cm (39–98 in). Autumn weather is usually clear and bright. Winters tend to be warmer than in similar latitudes except in the north and west, where snowfalls are frequent and heavy. Spring is usually pleasant, and the summer hot and humid. There is a rainy season that moves from south to north during June and July.

Average temperature ranges from 17° C (63° F ) in the southern portions to 9° C (48° F ) in the extreme north. Hokkaido has long and severe winters with extensive snow, while the remainder of the country enjoys milder weather down to the southern regions, which are almost subtropical. The Ryukyus, although located in the temperate zone, are warmed by the Japan Current, giving them a subtropical climate. The typhoon season runs from May through October, and each year several storms usually sweep through the islands, often accompanied by high winds and heavy rains.

who ever wrote this he/she helps me A LOT!!!!
thank you
3
Inuyasha

whoever wrote this you gave me a A+ on my project thanks so much you are the coolest!!!!!
4
Orliya

Thanks!This was a really helpful article that allowed me to know of facts that I didn't know previously of Japan's climate:)
5
Lunds

very rarley do i comment on a website, but whoever wrote this, has done a very good job, you have helped me with a geography case study, plain facts, no babble, thank you very much!!!!!
6
harriet

helped me with geography homework, thankyou! Geography will be a lot easier now :)
7
Nathan Eran Lewis

omg this website is awsome i got all the info i needed!!c(:
10
Johnny

This helped a LOT thank you now I know the climate of Japan!!!
11
kayla

Thanks for all your help Know that i found this website i have a A+.
13
nikki

Wow! This was so helpful! All the facts are clear and straight! This was a huge help with my Geography homework! I normally do not comment on any websites but I could not help it this time. Thank you so much to whoever wrote this!!!
14
Kelsie

This was a lot of information for my school project. Thank you so much!
15
mac n' cheese

this helped so so much! I couldn't find anything that worked for my project, but this was perfect! :)
16
beatiful

wow this was really helpful. thx i cant believe i am actually commenting i dont normally but that was really awesome
18
you dont need to know

Thanks! This was really helpful because i'm doing a project on japan!
19
jenna kelley

what is the highest and lowest tempetures in japan. and what is total in precipitation per year.
21
Falcon

This is insanely helpful, to whoever wrote this. I am deeply grateful for this information since i'm doing a project on japan.
22
Doug

thank you i needed to have this i waited till last second and this site helped me alot!
23
Leah

Thankyou so much you guys are the best ever!!
and you all gave me a+ thanks very much :) xoxoxox
24
]ipoui

Thankyou so much you guys are the best ever!!
and you all gave me a+ thanks very much :) xoxoxox
25
Vinny

This is too helpful!! I finish project in a few hours!
26
John M.

WOW!! good information It really helped me! Where did u get the information!!!
28
Welcome to 2012

Who ever wrote this website u rock! u are awesome :) !!
30
Jamal Shine

thanks alot you helped me with my homework and i got 2 merits 4 it
32
Itsme!

I had a project due tomorow and i was seriously rushing. Thank you who wrote this!! You SAVED me from getting DETENTION! You helped me A LOT THANKS!!
33
kayla

thankyou for putting this up. it will really help me on my project on japan.
36
Kennedi

Thx got an A+ for my geography page for my country report on Japan. really usfull
37
AWESOMENESS

this is really good thank you to whoever made this. This will look really good on my homework.
39
savage

Thanks so much it looks savage on my page for homework so thanks!! :)
40
katerina

Thanks a lot! my project is due tomorrow and it helped me a lot.
41
RPC

OMG I love who ever made this website!!! Thank you so much for all the helpfull information!
42
Mirain

thank you guy so much! This helped a lot, because I had to do an assignment on Japan, and I had to include the temperature!
43
Nonya

You helped a lot. All other websites just go to far into detail. Thanks!
44
ihateprojects

Thank you so much. I am doing a project on japan and you just helped me a lot. Cheers!
45
Dude

Thank you very much! I love how straight forward it was.
46
ohmygosh

absolutely amazing for revision! thanks sooo much! so useful and great
49
Chris

Whoever made this is awesome! This page really helped me with a Geographical Case Study! Thanks so much!
51
Victuuri_is_OTP!!!

this is amazing and just what i needed for my project! THANK YOU!!!
52
loly

whoever wrote this, she/ he, thank you because it helped me on my final part of a 1 MOUNTH PROJECT