Israel has the most advanced economy in the Middle East, although the country has been plagued with political and social woes for much of its independence. The onset of the intifada in September 2000 threatened to reverse much of the economic progress that had been made in the prior few decades. The violence has left several industries, especially the tourism sector, in critical states. Also, Israel's sizeable external debt, which was equivalent to about 38% of GDP in 2000, has put a damper on the economy's expansion. 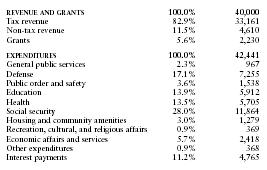