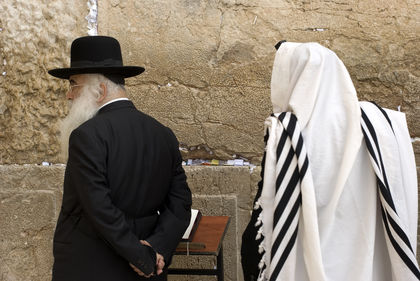 The traditional division of the Jews into Ashkenazim (Central and East Europeans) and Sephardim (Iberian Jews and their descendants) is still given formal recognition in the choice of two chief rabbis, one for each community. A more meaningful division, however, would be that between Occidentals and Orientals (now also called Sephardim). Oriental Jews, who are in the majority, generally believe themselves to be educationally, economically, and socially disadvantaged by comparison with the Occidentals.

The minority non-Jewish population is overwhelmingly Arabic-speaking, but Israel's minorities are divided into a number of religious groups and include several small non-Arab national groups, such as Armenians and Circassians. The government of Israel has declared its intention to strive for equality between the Arab and Jewish sectors of the population. Israel's Arab citizens do not share fully in rights granted to, and levies imposed on, Jewish citizens. The rights of citizenship do not extend to Arabs in the administered territories. The living standards of Arabs in Israel compare favorably with those of Arabs in non-oilproducing Arab countries, but they are considerably below those of the Jewish majority, especially the Ashkenazim. As a consequence of repeated wars between Israel and its Arab neighbors and the development of Palestinian Arab nationalism and terrorism, tensions between Jews and Arabs are a fact of Israeli daily life, especially in the West Bank and Gaza Strip.