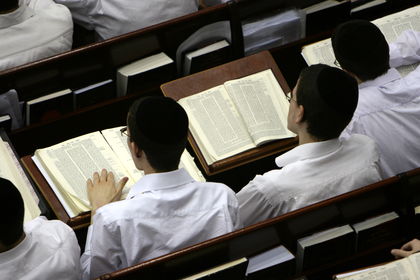 Education is compulsory for 11 years and free for all children between 5 and 15 years of age. Primary education is for six years followed by three years of lower secondary and three more years of upper secondary education. A state education law of 1953 put an end to the separate elementary school systems affiliated with labor and religious groupings, and established a unified state-administered system, within which provision was made for state religious schools. Four types of schools exist: public religious (Jewish) and public secular schools (the largest group); schools of the orthodox Agudat Israel (which operated outside the public school system but were assisted with government funds); public schools for Arabs; and private schools, mainly operated by Catholic and Protestant organizations. The language of instruction in Jewish schools is Hebrew; in Arab schools it is Arabic. Arabic is taught as an optional language in Jewish schools, while Hebrew is taught in Arab schools from the fourth grade.

In 1996, primary schools had a total of 631,916 students. Secondary level schools had 541,737 students and approximately 54,000 teachers in the same year. The pupil-teacher ratio at the primary level was 13 to 1 in 1999. In the same year, 100% of primary-school-age children were enrolled in school, while 88% of those eligible attended secondary school.

Israel has eight institutions of higher learning. The two most outstanding are the Hebrew University (founded in 1918) in Jerusalem and the Israel Institute of Technology (Technion, founded in 1912) in Haifa, both of which receive government subsidies of about 50% of their total budgets; the remaining funds are largely collected abroad. The Tel Aviv University was formed in 1956. Other institutions include the Bar-Ilan University in Ramat-Gan, opened in 1955 under religious auspices; the Weizmann Institute of Science at Rehovot, notable for its research into specific technical, industrial, and scientific problems; Haifa University; and Ben-Gurion University of the Negev in Beersheba. An Open University, promoting adult education largely through home study, was established and patterned on the British model. In 1996, universities and equivalent institutions enrolled 198,766 students. Adult illiteracy rates for the year 2000 were estimated at 3.9% (males, 2.1%; females, 5.7%). As of 1999, public expenditure on education was estimated at 7.7% of GDP.

well it helped with my project! For social studies on Israel although i would like the percentage of students going to school in israel
2
camille

this was a really informational page and it helped me out a lot.
3
Hannah

It helped me with my project, too! It ws very useful.
4
tarniem

i think it would help and learn about israeli people n about there religion also.
6
ali

this was an awesome help..i look everywhere for proper info..finally found it here..thx
7
olukoya

tnx for the information!! it helps me a lot 4 my project! thnxz!!

Like Anna this also helped me on my Social Studies Project! :)
10
kojin

.,.thanks to this, i have a report i can definitely show to my teacher and i'm sure she'll be happy and be proud of me.,.by the way, this report really helped me with our play.,.
12
lily effen

This also helped a lot with my social studies project:)
13
school

Would like to know how many hours a day they attend?
14
Jayde

I think they can talk more about what they learn and how they do it, but other then that i love this! It helped me on my country report for school and I got an 100! I picked Israel because I'm Jewish and I have been to Israel! Its fun and all of this information is true! I saw it with my own eyes!
15
Jaden

Do you have the percentage of children attending schools?
16
Jennifer Boer

Thank you for the clear presentation. Is it possible to have more detail on the literacy rates along social group lines ?
17
la mala

This website is awesome. It was really good and helped me a lot with my project. I would recommend this website to a lot of people. Really helpful. Thamks