Israel's foreign trade has consistently shown an adverse balance, owing mainly to the rapid rise in population and the expansion of the industrialized economy, requiring heavy imports of machinery and raw materials. The imbalance on current accounts has been offset to a large extent by the inflow of funds from abroad. Deficits are often offset by massive US aid and American Jewish philanthropy. Even with these funds, however, Israel has in recent years been running increasingly larger deficits, reaching 4.7% of GDP in 1995. Financing this deficit is easier on Israel than on many nations primarily because of its relationship with the US. Foreign direct investment reached a record $5 billion in 2000, and total foreign investment stood at a record $9 billion.

The US Central Intelligence Agency (CIA) reports that in 2002 the purchasing power parity of Israel's exports was $28 billion while imports totaled $30.8 billion resulting in a trade deficit of $2.8 billion.

The International Monetary Fund (IMF) reports that in 2001 Israel had exports of goods totaling $27.7 billion and imports totaling $30.9 billion. The services credit totaled $12 billion and debit $12.6 billion. The following table summarizes Israel's balance of payments as reported by the IMF for 2001 in millions of US dollars. 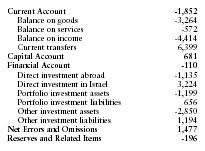