Major cities, towns, and villages are connected by a modern network of highways and roads which have made old caravan 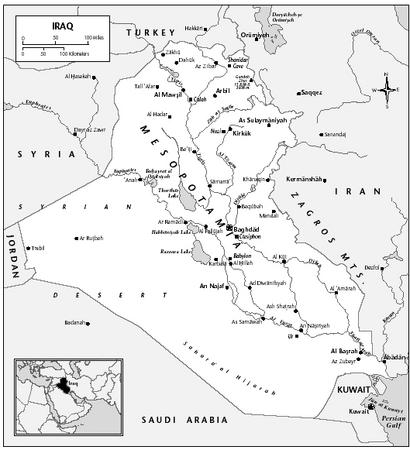 Railroads are owned and operated by the Iraqi State Railways Administration. A standard-gauge railroad connects Iraq with Jordan and Syria, and nearly all the old meter-gauge line connecting Irbil in the north with Basra, by way of Kirkuk and Baghdad, has been replaced. In 2002, there were about 2,339 km (1,453 mi) of railway lines.

Iraq had 150 airports in 2002, of which 77 had paved runways. However, an unknown number were damaged during the March-April 2003 war. Baghdad, Basra, and Mosul have international airports. Iraq Airways is the state-owned carrier; in the 1980s, its international flights landed only at night because of the Iraqi-Iranian war. The war also virtually closed Iraq's main port of Basra and the new port of Umm Qasr on the Persian Gulf. Iraq has some 1,015 km (630 mi) of waterways; the Shatt al Arab is usually navigable by maritime traffic for 130 km (81 mi); the Tigris and Euphrates has navigable sections for shallow-draft boats, and the Shatt al Basrah canal was navigable by shallow-draft craft before closing in 1991 because of the Gulf War. Expansion of Iraq's merchant marine, which totaled 1,470,000 GRT in 1980, was halted by the war with Iran and again by the Persian Gulf War; by 2002, the merchant marine totaled only 25 ships with a total capacity of 186,709 GRT.