Iran's fiscal year coincides with its calendar year, beginning on 21 March. The budget is prepared by the Finance Ministry and submitted to Parliament. Trade reforms implemented since 1991 have boosted economic growth and reduced budget deficits. The general government deficit fell from 9% of GDP in 1988 to 2% in 1992, but was up to almost 7% again in 1998. By 2002, however, external debt was equivalent to less than 2% of GDP as a result of market refroms. 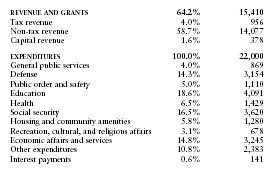