Throughout the 1960s and 1970s, Iran had a favorable trade balance, but substantial imports of services resulted in an annual deficit on current accounts. Long-term capital inflows from private sources reached a peak in 1965; between 1968 and 1973, capital from foreign governments played a prime role in Iranian development. By 1974, with a net trade surplus of $17,718 million and a current accounts surplus of $10,893 million, Iran was one of the world's major exporters of capital. The current accounts balance remained in surplus annually until the massive economic and civic turbulence caused by the revolution of 1979 and the long, devastating war with Iraq (1980–88). By the time the war had ended, Iran's position as a net foreign creditor was badly eroded due to a substantial drop in the world price for oil and a sharp increase in dependence on imports—largely machinery and basic commodities to rebuild infrastructure. By 1993, Iran owed foreign creditors nearly $30 billion. In following years, the government, still plagued by lessening oil revenues and a quota of production imposed on it by OPEC, was forced to reschedule the debt—with payments coming due in 1996, when foreign debt went down to approximately $22 billion. Foreign debt stood at approximately $8.2 billion in 2002. Increases in oil output in 2003 drove economic growth, but oil prices were forecast to decline in 2004, which would negatively affect the current account.

The US Central Intelligence Agency (CIA) reports that in 2002 the purchasing power parity of Iran's exports was $24 billion while imports totaled $19.6 billion resulting in a trade surplus of $4.4 billion.

The International Monetary Fund (IMF) reports that in 2000 Iran had exports of goods totaling $28.4 billion and imports totaling $15.2 billion. The services credit totaled $1.4 billion and debit $2.3 billion. The following table summarizes Iran's balance of payments as reported by the IMF for 2000 in millions of US dollars. 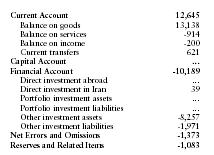 This article is really confusing.
Make it so people all ages can understand it