Government expenditures (including capital expenditures) have outrun public income by a considerable margin each year since 1952, and this cash deficit has been met by foreign aid receipts. Since 1985, however, Indonesia has discouraged public sector and monetary growth, resulting in an overall budgetary surplus in 1991/92, despite a significant drop in oil revenues from falling prices. The East Asian financial crisis of 1998 hit Indonesia hard. In 1998, the government deficit reached over 3% of GDP, partially because of subsidized rice imports and investment in the failing banking sector. As of 2002, the economy was just beginning to recover to pre-1997 levels, and the growth rate was not considered high enough to achieve full employment anytime soon. At the end of 2001, Indonesia's external debt was the equivalent of 20% of total GDP. 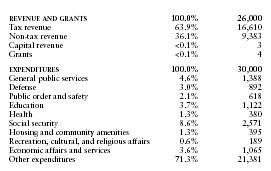