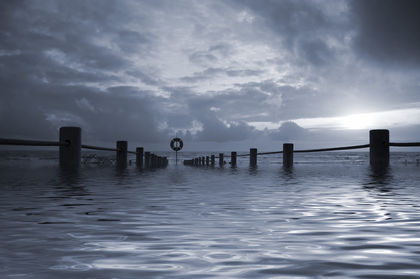 Indonesia's industrial sector has not fully recovered from the blows of the Asian financial crises in 1997–1998, when the fall of the rupiah, from about 2,600 down to 17,000 to one US dollar, left 75% to 80% of its businesses technically bankrupt. Recovery to pre-crisis levels has been hindered by both internal and external disturbances, particularly after 2001, when the effects of the global slowdown were aggravated by intensifying political violence and uncertainty climaxing in the 12 October 2002 bombings in the Bali resort of Kuta Beach. The Indonesian government's Industrial Production Index showed a year on year ( yoy ) growth throughout 2000, peaking at a 14% increase in the first quarter of 2001. Year on year increases declined in second and third quarters, and then turned negative in the fourth quarter, reaching a -13% ( yoy ) decline in the second quarter of 2002. Smaller enterprises, reflected in the government's figures for nonoil manufacturing, have done better, maintaining a positive yoy growth rate, although one that has dropped steadily from a 7.5% ( yoy ) improvement in the first quarter of 2000 to less than 3% ( yoy ) in the second quarter of 2001. Overall, the US Central Intelligence Agency (CIA) estimates that the industrial production growth rate in 2001 was 3.1%. The leading industries by value are petroleum and natural gas; textiles, apparel and footwear; mining; cement; chemical fertilizers; plywood; rubber; food and tourism.

Industrial expansion is given a high priority in development plans. Labor-intensive industries are stressed, together with industries producing consumer items for domestic consumption and export and products accelerating agricultural development. The government encourages industrial investors, particularly those who plan to export, to locate in one of its eight bonded zones (BZs), the Batam Industrial Park or free trade zone (FTZ) or in an export-processing zone (EPZ). The Batam Industrial Park, located on Batam Island in the Malacca Strait 20 km (12.5 mi) south of Jakarta, was designed to attract investment away from crowded Singapore. In the period January to November 2002, 80 foreign projects were licensed in Batam, up from 59 during the same period in 2001. In November 2002, however, Sony Electronics, Indonesia's largest industrial employer, announced that it would be closing its Indonesian operations in March 2003 as part of a plan to downsize from 70 plants to 54 worldwide. Outside of Batam, foreign investment approvals in 2002 dropped 23% compared to 2001 (from 1333 to 1028), and 35.4% in value (from about $15 billion to $9.7 billion). Approvals, which the Indonesian government reports regularly, are indicators of foreign investor confidence but they are not the same as the actual level of investment, which is much lower. Domestic investment projects also declined in both number and value in 2002 compared to 2001, down 31.5% to 181 projects, and down 57% to R P 25,262 billion (about $11.2 billion in purchasing power parity terms). It is also estimated that at least 20 foreign businesses have left in the first three quarters of 2002 due to local taxes and other regulations that localities have or might impose as they were empowered to do under tax reforms introduced in January 2001. Political uncertainties, insecurities about the new decentralized tax regime and worsening labor relations were cited as the main factors holding back foreign investment.

Industries which process Indonesia's abundance of natural resources include those based on petroleum, wood, sugar, rubber, tea, coconuts, palm kernels, sisal, kapok, rice, and cassava. Manufactured products include consumer goods such as tires and tubes, rubber shoes, radios, batteries, soap, margarine, cigarettes, light bulbs, textiles, glass, paper, tractors, and trucks. Other industries established in recent decades include the Krakatau Steel Industrial Estate at Cilegon (in northwest Java), plywood factories, cement works, spinning mills, knitting plants, iron works, copper and other foundries, a ceramics plant, a leather-goods plant, and a glass factory, and the manufacture of petrochemicals and urea fertilizers, as well as, most ambitiously, facilities for automobile assembly, shipbuilding and aircraft manufacture. The Asian financial crisis doomed ambitions for the mass production of passenger airplanes, as well as a "national car," the Timor. Indonesia's National Car Project was established in February 1996 as an extension of a 1993 program that gave tariff and tax incentives for using locally produced parts in automobiles, and which sought to market the Timor as the "national car, " although in fact it was made mostly in Korea. Nepotism and corruption were also charged against the project as Pres. Suharto put his youngest son, Huotomo or "Tommy," at its head. The Asian financial crisis of 1997–98 swept most vestiges of the project away, aided by a WTO ruling calling for the elimination of the program's special tax, customs, and credit privileges issued by a WTO panel called for on the eve of the crisis by Japan (17 April 1997), the European Union (12 May 1997), and the United States (12 June 1997), and issued in April 1998. In the meantime, the immediate elimination of the National Car Program's privileges had been made a conditional of the Indonesia's IMF bailout program by the Memorandum on Economic and Financial Policies (MEFP) of 15 January 1998.

From World War II until the 1990s, overall industrial growth was small with agriculture the dominant sector of the Indonesian economy. However, in the 1990s, industry and services took over as the dominant sectors, respectively contributing about 41% and 42% of the GDP, with agriculture falling to 17%. Although the government has put an emphasis on developing labor-intensive industries, industry accounts for only for 16% of employment, compared to a 45% share for agriculture and 39% for services. In 1991, textiles were the key industrial export, accounting for 47% of the total. In 2001 textiles and garments were technically still the leading industrial export, but only accounted for 13.6% of total export earnings. The value of textiles exports was down 15% from 2000, due mainly to the global economic slowdown, and was predicted to drop another 10% in 2002. Textiles remains characterized by small producers, with more than 1200 registered textile companies in Indonesia, employing more than a million workers.

The petroleum refining industry has not grown significantly over the last decade. In 1992, Indonesia had six refineries, all operated by Pertamina, the state oil company. Production of refined products was 572.8 million barrels, which is 38% higher than the annual production from Indonesia's now eight state-owned refineries in 2001, operating at 96% capacity. Statistics on refined petroleum products consumption are questionable because of considerable smuggling out of Indonesia to escape its price controls. Oil products subsidies are scheduled to be phased out by 2004. The government has issued several licenses to foreign investors to build refineries, but as of 2002, only one has reached the construction phase. Coal production reached 70 million tons per year by 1999. In 2001 production was 92.5 million tons with 65.3 million tons exported, and was on track for production of over 100 million tons. and exports of 70 million tons. in 2002. The regulation and licensing of the coal industry in Indonesia, which currently includes 33 producing companies, was decentralized in legislation that went into effect in 2001.

The steel industry in Indonesia basically consists of one large integrated mill, the PT Krakatau Steel complex plus numerous mini mills that use scrap steel as their raw material input. In 1992 steel billet production was 560,000 tons. In 2000, total steel billet capacity was 2.34 million tons across 11 companies, but the plants were only running at 60% capacity. In the Asian financial crisis, Indonesia's total steel production dropped from 7.3 million tons in 1997 to 2.7 million tons in 1998 as domestic demand collapsed. The industry was able to survive through exports, although facing stiff competition from its regional neighbors, Eastern Europe and Latin America, particularly. What recovery had been achieved in 2000, however, was cut off abruptly in 2001 when the United States, its biggest customer, placed dumping duties on Indonesian steel.

Indonesia produces nitrogen, phosphate and potash fertilizers, but the strongest prospects are for the urea industry because of Indonesia's natural gas deposits. In 2001, urea production was6.954 million tons, above the total fertilizer production for 1992, which was 6.5 million tons. Prospects are good for an export market in urea, but in 2002 most fertilizer output was for domestic consumption, and plants, many of them state-owned, were running at near 100% capacity, and fertilizer formed less than 1% of exports.

Wood and wood products have traditionally been Indonesia's second-largest industrial export group, accounting for 11% or 12% of total export value, though electronic some times claims a larger share. The robust growth in the output of wood and wood products, from 4 million cm in 1967 to an estimated 60 to 70 million cm in 2001, is the cause of international controversy because of the rapid deforestation involved. Global Forest Watch estimates that forest cover has declined from 162 million hectares to 98 million hectares (39.5%) from 1995 to 2000. Laws are in place to curb the rate of exploitation, but it is estimated that over half of the logging done is illegally. In 2001 consumption of plywood was 13 million cu m and the total consumption of logs was 26 million cu m. Wood products, pulp, paper, and paper products, are Indonesia's second-largest sector of industrial exports. The chemical industry experienced an annual growth rate of 13% prior to 1993; and after 1997, the depreciation of the currency encouraged chemical production for the export market. In the consumer goods manufacturing sector, activities are run primarily by private enterprise. All oil and natural gas processing have historically been controlled by government enterprises, as have been other major heavy industries, such as basic metals, cement, paper products, fertilizer, and transport equipment. After the recession in 1998, the government proposed liberalizing heavy industry. Of the 168 parastatals, 140 were scheduled for privatization.

During the 1990s, Indonesia's eight oil refineries, all owned by the state company Pertamina, produced about one million barrels of refined petroleum per day, contributing 9% of the GDP in 1999. In 1997, the fuel sector contributed about 20% to Indonesia's foreign exchange earnings and a waning amount of government tax revenues. Prior to 1997, these sectors accounted for nearly 80% of exports and 70% of government revenues. Natural gas production has steadily increased, and may take over from petroleum as a major source of export revenue. Natural gas proven reserves will last 40 years at current production rates, which reached 180,000 barrels per day in 1999.

In July 1992 non-tariff barriers were reduced and key industries were deregulated to allow free importation of essential manufacturing inputs. There is a shortage of skilled technical personnel to support high-tech industries; most technology has been imported through joint ventures. The agency for Strategic Industries (BPIS), a state-owned holding company including aircraft, telecommunications and high-technology industries, formed a joint venture with a major foreign multinational technology corporation to promote technology transfer to Indonesia. Most industrial enterprises were negatively affected by the 1998 recession, with an overall decline of at least 15%. The Indonesian Bank Restructuring Agency (IBRA) took over the majority of Indonesia's non-performing industrial assets in 2000 with plans to sell, including: cement factories, mining facilities, manufacturing plants, food processing firms, plywood production plants, vehicle assembly lines, chemical plants, property, and agribusinesses.