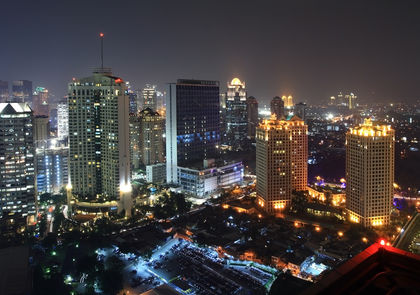 From the late 1960s through the mid-1980s, the Suharto government focused its efforts on financial stabilization, relying heavily on advice and assistance from multilateral aid donors. The results were mixed. The fiscal crisis threatened by the accumulated debts of the Sukarno years was averted through debt rescheduling and improved economic management; nevertheless, the depth of Indonesia's continuing reliance on foreign aid remained apparent through the mid-1980s. Efforts to develop capital-intensive import-substitution industries afforded only marginal benefits to the vast majority of Indonesians. Public expenditures on the first five-year plan (1956–60) included 25% for mining and manufacturing, 25% for transport and communications, 15% for power projects, and 35% for all other categories. A new eight-year development plan was launched in January 1961. Funds were allocated for key "A" projects; including 25% for transport and communications, 22% for industry, 13% for special projects including the military, 12% for clothing, and 11% for food. Eight "B" projects (petroleum, rubber, tin, and forestry) were to supply the financing for the "A" projects. Because of the lack of foreign financing, upon which most of the "B" projects depended, all "A" and some "B" projects were suspended in November 1964. For the period 1965–68, economic rehabilitation took precedence over development, and all official projects were evaluated on purely economic lines. A subsequent plan (1969–74) placed emphasis on the development of agriculture. Aid to industries was encouraged for activities that support agricultural development, such as the production of fertilizers, cement, agricultural equipment, and machinery for processing agricultural products. Assistance was also given to such import-substitution industries as textiles, paper, rubber tires, and housing materials. The 1975–79 plan represented a shift from stabilizing policies to stepped-up development. The plan placed considerable focus on the rural economy, stressing labor-intensive industries along with improved provision of housing and education. In the program to aid farmers in increasing their output and marketing their commodities, emphasis was placed on encouraging farmers' cooperatives and banks. Labor unions were encouraged to help improve the lot of plantation and industrial workers.

Efforts to restructure the economy in the 1980s resulted in an expansion of real GDP 6% annually on average. The 1979–84 development plan, called Repelita III, emphasized the "development trilogy" of economic growth, equity, and national stability. Top priorities were tourism and communication (15%), agriculture and irrigation (14%), mining and energy (13%), education (10%), and regional and local development (10%). The 1984–89 five-year plan, called Repelita IV, emphasized industry (9.5% growth rate), agriculture (3%), petroleum and mining (2.5%), transportation and communications (5.2%), and construction (5%). However, low oil prices caused the government to reduce its goals and to promote private and foreign investment. Repelita V, 1989–94 emphasized industry (8.5% growth rate), agriculture (3.6%), petroleum and mining (4.2%), trade (6%), transportation and communications (6.4%), and construction (6%). The development of mining and energy were prioritized, as well as certain areas of manufacturing, forestry, agriculture, transportation, communications, and tourism. The sixth five-year development plan (1994–99), Repelita VI, forecast an annual average GDP growth rate of6.2%, and estimated that per capita income would reach $1000 by 1999. The plan focused on the privatization of a number of industries, and the gradual opening up of foreign investment. These goals were met by 1997, but the 1998 breakdown of the economy prompted international aid agencies to step in.

The most important economic development policy before privatization and liberalization was outlined in the 1988 Guidelines of State Policy. This document introduced transmigration development; a policy aimed at overcoming uneven population distribution in Indonesia. The policy had multiple objectives: to ease the burden of densely populated regions, to upgrade regional development, to expand job opportunities, to support national unity, and to strengthen national defense. Transmigration in densely populated areas such as Java, Bali and West Tenggara aimed to increase population productivity and decrease environmental hazards. Transmigration in sparsely populated regions such as Sumatra, Kalimantan, Sulawesi, Maluku, Irian Jaya, and East Timor, aimed to increase productivity of natural resources, as well as increase employment and job opportunities. Declining extent of land ownership by farmers was a major problem in both densely and sparsely populated areas. These activities are overseen by the Coordinating Body for the Implementation of Transmigration (BAKOPTRANS). Forestry statistics from 1985 showed that some 30 million ha of forestland in sparsely populated areas could be converted to agricultural uses. Agriculture was an important sector for development in the transmigration policy. As new areas opened more employment opportunities were predicted to be available. Productive land use included, fisheries, industry, services and industrial forest products. In Repelita V the transmigration target was to relocate 550,000 families into new settlement areas outside of Java and Bali. The third year of Repelita V (1991/92) targeted 70,000 families for transmigration, including 28,240 families of public transmigration and 41,760 families of self-initiated transmigration. In fact 64,211 families (91.7%) were resettled, consisting of 25,720 families of public transmigration and 38,491 families of self-initiated transmigration.

Major obstacles to the implementation of the policy continued to delay the preparation of the settlements in the destination areas and at the places of origin during assembly and departure of transmigrants. Agricultural lassitude was one indicator of the program's failure. In 1991/92 rice production was about the same as the previous year, but compared to the national production rate per hectare, production was considered low. The production rate of nuts, bean crops, and cassava declined during the same time periods, and while coconut plantations increased, coffee and clove estates decreased by about 30%. The increase of large and medium livestock was minor, while poultry numbers declined by 21%.

Bilateral and multinational assistance has played a major role in Indonesia's development. Before 1965, Indonesia received substantial aid from the USSR and other communist states; such funding included some $750 million in economic credits and more than $1 billion in military aid. Since 1966, the foreign-aid pattern has turned dramatically toward the West. A group of nations (including the United States, Netherlands, Japan, Belgium, France, Germany, Italy, United Kingdom, Switzerland, Canada, and New Zealand) and organizations (including the IBRD and Asian Development Bank) have joined to form the Inter-Governmental Group on Indonesia (IGGI) as a major funnel for aid. Total IGGI assistance was estimated at $2.5 billion for 1985/86. During the 1970s and early 1980s, the IMF took a central part in reorganizing Indonesia's financial structure and planning methods. At the Indonesian government's invitation, the IMF has also evaluated the country's economic programs for the purpose of advising donor nations. More recently, the IMF expanded its role by advising the government on planning and foreign aid allocation. In November 1991, in reaction to the Indonesian army's shootings of demonstrators in Dili, East Timor; the Netherlands, Denmark, and Canada suspended aid to Indonesia. In a blanket refusal to link foreign assistance to human rights issues, the government announced it would decline all future aid from the Netherlands. The government also requested that the IGGI be disbanded and replaced by the Consultative Group of Indonesia (CGI) formed by the World Bank and comprised of 18 donor countries (Australia, Austria, Belgium, Canada, Denmark, Finland, France, Germany, Italy, Japan, New Zealand, Norway, South Korea, Spain, Sweden, Switzerland, the United, and the United States) and 12 multilateral agencies. An IMF-funded program that began in 1997 offered a total of $12.5 billion to Indonesia over a period of three years to support the financial system and aid in the restructuring of the economy. The total international aid package was projected at a total of over $40 billion by 1999.