Indonesia had persistent balance-of-payments difficulties from the time of its independence. Typically, surpluses on merchandise trade were achieved by restricting imports, but these surpluses did not provide sufficient exchange for debt repayments or for other invisibles, such as profit remittances on foreign investment and interest payments on government loans from abroad. Indonesia's payments position brightened considerably in the late 1970s as a result of a rapid increase in oil prices mandated by OPEC. However, expansion of the non-oil export industries failed to keep pace with burgeoning import requirements for some consumer goods and machinery, equipment, and spare parts for development programs. The current account deficit averaged -2% of GDP between 1992 and 1997, but accrued a surplus of over 4% of GDP in 1998 due to currency devaluation and a cut in imports of one-third. Real GDP growth was expected to rise in 2004, as demand for exports of goods and services increased. The current account was forecast to remain in surplus in 2003/04, but to decline as a percentage of GDP. Indonesia's total external debt stood at approximately $135 billion in 2001; a loan with the IMF was due to expire in December 2003.

The US Central Intelligence Agency (CIA) reports that in 2001 the purchasing power parity of Indonesia's exports was $56.5 billion while imports totaled $38.1 billion resulting in a trade surplus of $18.4 billion.

The International Monetary Fund (IMF) reports that in 2001 Indonesia had exports of goods totaling $57.4 billion and imports totaling $34.7 billion. The services credit totaled $5.5 billion and debit $15.9 billion. The following table summarizes Indonesia's balance of payments as reported by the IMF for 2001 in millions of US dollars. 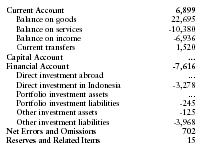 I want to know about the Balance of Payment of Indonesia