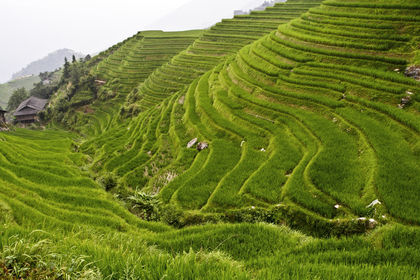 About 45% of Indonesian workers are engaged in agriculture, which accounts for 17% of GDP in 2001. Some 31 million ha (76.6 million acres) are under cultivation, with 35% to 40% of the cultivated land devoted to the production of export crops. Some 60% of the country's cultivated land is in Java.

There are three main types of farming: smallholder farming (mostly rice), smallholder cash cropping, and about 1,800 large foreign-owned or privately owned estates, the latter two producing export crops. Small-scale farming is usually carried out on modest plots—those in Java average about 0.8–1 ha (2–2.5 acres)—often without benefit of modern tools and methods, good seed, or fertilizer. Although rice, vegetables, and fruit constitute the bulk of the small farmer's crops, about 20% of output is in cash crops for export, the chief of which is rubber. Of the estategrown crops, rubber, tobacco, sugar, palm oil, hard fiber, coffee, tea, cocoa, and cinchona are the most important. Dutch, United Kingdom, United States, French, and Belgian capital financed estate agriculture in colonial times, with the Dutch share being the largest. Management of Dutch interests was taken over by the Indonesian government in December 1957; in 1964, the 104 UK-operated plantations were confiscated without any compensation, and Indonesian managers were appointed. The following year, the US-operated plantations were expropriated, and all foreign plantations were placed under the control and supervision of the Indonesian government. In 1967, some of the estates seized in 1965, including the US-leased rubber plantations, were returned, but the majority were retained by the government.

Because the population is rapidly increasing, the government seeks to achieve food self-sufficiency through expansion of arable acreage, improved farm techniques (especially the use of fertilizers and improved seeds), extension of irrigation facilities, and expanded training for farmers. Production of rice, the staple food, has been gradually increasing, and production comes close to meeting domestic requirements. This increase has resulted less from extension of cultivated area through the government's resettlement policy than from expanded use of irrigation, fertilizers, and pesticides and cultivation of high-yielding hybrid rice, especially insect-resistant hybrids. It also reflects the success of the government's "mass guidance" program, which provides technical assistance, easy credit terms, and marketing support through a system of village cooperatives. Additional support was provided by the National Logistics Board, which is responsible for price regulation and the national rice-rationing programs. Due to the rapid growth of the industrial sector, the agricultural contribution to GDP is expected to decline to 11.8% by 2003.

I really love this website. It is the best thing that has ever happened to me. It gives me a bunch of info. Also my friend taylor loves this website.
3
Sarah

I have a speech due I need to argue to why is rice important to be grown in Indonesia?The goods and the bad.
4
Haley

thank you soo much for the information! :) it really helped me for my indonesia project!!
5
daija

thanks so much, u helped me with my last year 9 project for the year!
8
Shahbax

Indonesia agriculture are right thing for world . It is for avery one .
10
Sarah

Do you know any information on the production of Indonesia's agriculture? I have an assignment due tomorrow and need that information... please.

Dear school kids, do you really expect nations encyclopedia to respond to your requests to do YOUR homework for you? How about you all do some proper research and use several references? It'll be a pleasant surprise for your teachers.
12
Sadiq

A comprehensive knowledge about the agriculture sector of Indonesia, which will guide to me to write the artical
thanks a lot.. Sadiq
13
Prof T. J. Agiobenebo

I love to have a copy of the paper to fully appreciate its discourse.
14
D.S.Yadav

Dear sir
We are looking for agriculture products exporters from Indonesia. Kindly provide if possible.

Well, thanks for sharing information about Indonesian agriculture as hopefully it is going to be my future more specifically the Indonesian smallholder participation in markets, so i found it really helpful and thanks once again
16
F.Febryanti

Thanks for this information,even the latest data are in 2001 but it can help my working paper ^-^
17
kayla

You show great agriculture but what about religion?
18
kayla

We are looking for agriculture products exporters from Indonesia
19
kayla

thanks for all your help, you helped me on my geography,I got 100%
20
Emily

I need to complete an assignment thatis based on why crops grow so well in Indonesia. if you could help me pleasedp so as I must get it completed fairly soon
21
Michal

was really helpful! It helped me a lot on my project and got a good grade for their agriculture
22
Ebai roger

this website was helpful so thank you- REALLY USEFUL,
FROM US