The government's financial year extends from 1 April to 31 March, and the budget is presented to the parliament on the last day of February. The executive branch has considerable control over public finance. Thus, while parliament can oversee and investigate public expenditures and may reduce the budget, it cannot expand the budget, and checks exist that prevent it from delaying passage.

Budgets in recent decades have reflected the needs of rapid economic development under rising expenditures of the five-year plans. Insufficient government receipts for financing this development have led to yearly deficits and a resulting increase of new tax measures and deficit financing. The Gulf crisis, increased interest payments, subsidies, and relief in 1991 caused the central government's fiscal deficit to reach 9% of GDP. It fell to 5.7% in 1992–93 but rose to 7.3% of GDP in 1993–94. Principal sources of government revenue are customs and excise duties and individual and corporate income taxes. Major items of expenditure are defense, grants to states and territories, interest payments on the national debt, and economic, social, and community services. High interest rates, 8% inflation, slow industrial growth, and weak foreign investment prompted the government to recommend dramatic new initiatives in the 1997– 98 budget, including cuts in taxes and duties. The proposed budget projected a 15% increase in expenditures to $65 billion and a reduction in the deficit to 4.5% of GDP. While expenditures were cut, the budget deficit actually grew in 1997– 98 to about 8.5% of the GDP due to currency devaluation and the Asian financial crisis. The budget for 2000 included a 30% increase on defense spending due to the Pakistani conflict.

Although applauded by the business community as market-friendly, some observers were chagrined by the 2000 budget's failure to squarely tackle infrastructure reforms. Most analysts agree that India spends too much on current expenditures and not enough on public investment. India suffers from inadequate roads and ports, a substandard educational system, and unreliable power supplies. 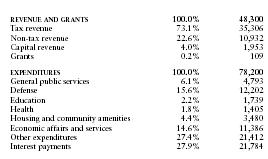 the govt. should make sincere attempt to remove exemption granted in the field of direct and indirect taxes.
govt., should remove unwanted subsiddies which are not reaching the underdevloped areas or poor people. WHILE PEOPLE EAT SUBSIDIES, THE SUBSIDIES EAT GOVERNMENT.
2
sharon