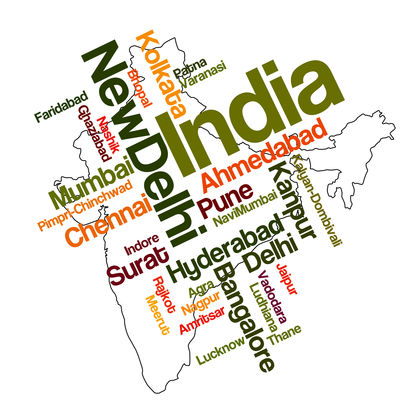 India began its independent existence with the Indian National Congress supreme at the center and in all state legislatures. In its various manifestations, it has controlled the government for most of the years since independence in 1947. Founded in 1885, the Indian National Congress, known after 1947 as the Congress Party (CP), was the most powerful mass movement fighting for independence in British India. It became the ruling party of a free India by reason of its national popularity and because most leaders of the independence movement were among its members, including Indian first prime minister, Jawaharlal Nehru. In its progression from independence movement to ruling party, the CP spawned many offshoots and continues to do so to this date, as often for personal reasons as for matters of party policy. The first to do so was the socialist wing that split off shortly after independence to form a party in its own right, dividing again several times thereafter.

Other major parties at the time of independence included the Communist Party of India (CPI), with its origins in the peasants and workers parties of the past, representing, like them, the communist left. The CPI began the independence period under a cloud because of its Moscow-directed cooperation with the British during World War II. On the right were parties like the Hindu Mahasabha (HMS), doomed to ignominy when one of its kind killed Mahatma Gandhi in 1948. Within the political system, the HMS, nonetheless, reflected a vital Hindu nationalist strain that has seen several party iterations in the years since and continues to be force in the Hindi-speaking belt of north India. Parties on the left, right, and center have continued to divide or split off over the years, and more recently, with the decline of the Congress Party as an All-India national party, there has been a rise in the number of single state linguistic, sectarian, and regional parties capable of governing only at the state level but available for coalition building at the center.

Over time, ideology, as traditionally defined, has come to mean less and less in Indian politics even though use of the word socialism is widespread. The Congress Party platform supports a secular democratic state with planned economic and social development. In November 1969, as Indira Gandhi consolidated her political position as prime minister, she and her supporters split the party. Her splinter group called itself the New Congress Party and advocated a stronger socialist line than the other CP group. In elections held in March 1971, the New Congress Party (which later resumed calling itself the Congress Party) won an overwhelming majority in the Lok Sabha. Prime Minister Gandhi's declaration of a state of emergency in 1975, followed by the arrest of thousands of her political foes, led several opposition parties of otherwise divergent viewpoints to form the Janata (People's) coalition, which, campaigning against her "dictatorship," scored a major election victory in March 1977. The Janata government began a judicial inquiry into Mrs. Gandhi's activities as prime minister (along with investigations of her son Sanjay and others), denied her a parliamentary seat that she had won in a by-election in late 1978 and briefly had her jailed.

Rather than disgracing the former prime minister, these measures revived her popular following as the Janata coalition leadership began to unravel. Mrs. Gandhi and her reorganized Congress/I Party—"I" for Indira—reemerged as the nation's dominant political force, winning a large majority of seats in elections to the Lok Sabha in January 1980. Congress/I subsequently won control of 17 of 22 state governments.

Janata reverted to its three principal constituents: the Lok Dal, with strong caste support in certain rural areas; the Bharatiya (Indian) Janata Party (BJP), a descendant of the Hindu nationalist Bharatiya Jana Sangh Party (and heir to the HMS tradition); and the rump Janata Dal (JD), Congress in all but name, reflecting various populist, socialist, business, personal, and regional interests. Other active parties include the traditional Congress/S—"S" for Socialist—Party; the once Maoist, now nationalist, Communist Party of India/Marxist (CPI/M), which has long controlled governments in the states of West Bengal and Kerala); the pro-Moscow Communist Party of India (CPI); Telugu Desam, an Andhra Pradesh-based party; the All-India Dravida Munetra Kazagham (AIDMK) of Tamil Nadu, the Akali Dal factions representing Sikhs; the All-India Muslim League (AIML); and other ethnically or regionally based parties and groups.

In the 1990s, three changes took place in the government. In elections in the fall of 1989, the Congress/I lost its majority, and although it remained the largest single party, Rajiv Gandhi resigned as prime minister. Vishwamath Pratap (V. P.) Singh, leader of the Janata Dal, formed a government and became prime minister, with the help of two other parliamentary groups in December 1989. Eleven months later, he lost a confidence vote and was replaced by Chandra Shekhar, a former Congress leader, who formed a government with Congress/I support, only to resign himself four months later. During the 1991 election campaign that followed, former prime minister Rajiv Gandhi was assassinated, but the Congress Party/I was swept back into power under P. V. Narasimha Rao, a former minister in both Gandhi governments and Rajiv Gandhi's successor as party leader. Rao became prime minister in June 1991.

The election results of June 1991, as modified by party shifts later that year, established the following party standings in the Lok Sabha: Congress (I), 245; the Bharatiya Janata Party (BJP), 119; the CPI/M, 35; the Janata Dal Party (JDP) of V. P. Singh, 31; the breakaway Janata Dal (JD) of Ajit Singh, 20; the CPI, 14; the Telegu Desam, 13, the AIDMK, 11; others 38 (including five parties with fewer than 5), and nine vacancies. Congress strength rose to 256 by July 1993 when Rao narrowly survived a confidence vote, but in December, Ajit Singh and nine JD members of parliament joined the Congress Party, giving Rao a slender majority of 266 members (with 16 other seats vacant). Flux continued in June 1994 when the former prime minister V. P. Singh and 13 others left the JDP and sought recognition from the speaker of the house as a separate party.

Vajpayee had difficulty holding his government together amid several corruption scandals, however. He was replaced in 1996 by Deve Gowda, leader of the dozen small factions that formed the 176-seat United Front in the Lok Sabha. Gowda lost a noconfidence vote in April 1997 and resigned. He was replaced by Foreign Minister I. K. Gujral.The BJP rose to power as the country's most popular party in the 1996 elections, when it won 161 seats in the Lok Sabha and its leader, A. B. Vajpayee, was named prime minister. Meanwhile, Congress/I was in decline as corruption charges rocked the party, and won only 30% of the vote.

Several scandals affecting major political figures erupted in the summer of 1997. In June, Laloo Prasad Yadav, president of the Janata Dal was arrested on conspiracy charges in his home state of Bihar. Though he resigned from the Janata Dal, he subsequently formed the breakaway Rashtriya Janata Dal party. Former prime minister Narasimha Rao was charged with corruption and criminal conspiracy. Results of an investigation into the destruction of the mosque at Ayodhya in 1992 also resulted in criminal charges being brought against senior BJP figures such as L. K. Advani and the Shiv Sena's Bal Thackeray.

In May 1997, Rajiv Gandhi's widow, Sonja Maino, formally joined the Congress Party/I, a move many hoped would help restore the party's failing fortunes. Sitaram Kesri was reelected president of Congress/I in June. Within six months, Congress/I brought down the UF government after Gujral rejected its demand that the DMK, the Tamil Nadu-based party allegedly linked to Rajiv Gandhi's assassination, be expelled from the UF coalition. As neither Congress/I nor the BJP could form a coalition government, new elections were called for February– March 1998. Sonja Gandhi campaigned actively for Congress/I, but no party was able to gain an absolute majority in the elections. The BJP emerged as the largest party with 182 seats in the 545-seat Lok Sabha, followed by Congress/I with 142 seats.A. B. Vajpayee, parliamentary leader of the BJP, was appointed prime minister and asked to form a coalition government. He succeeded in putting together a fragile 14-party coalition that survived a vote of confidence on 28 March by 13 votes. This narrow parliamentary majority, however, clearly hampered Vajpayee's legislative program. In July, for example, the government was forced to shelve a bill that would have reserved one-third of the seats in the Lok Sabha and state legislatures for women because of strong opposition from (mostly male) deputies.

Sonja Gandhi began to take a more active role in Congress politics in 1998, and shortly after the elections she was elected to the post of president of Congress/I. Towards the end of the year, Congress/I showed signs of recovery by regaining Delhi and Rajasthan, both traditional BJP strongholds, in regional elections. However, this did not carry over to the national elections resulting from the fall of Vajpayee's government in April 1999, following the AIDMK leaving the coalition. In the run up to the September–October 1999 elections, both Sonja Gandhi and her daughter actively campaigned for Congress. The party split, however, over the issue of whether a foreign-born individual (i.e. Sonja Gandhi) could become leader of the country. Gandhi resigned as president of Congress in May 1999, although the party refused to accept her resignation. Shortly afterwards, Congress/I expelled Sharad Pawar, P. A. Sangma, and Tariq Anwar, the chief opponents of Gandhi within the party.

Sonja Gandhi won a seat in Parliament in the October 1999 elections and was also elected the Congress/I parliamentary leader. The Gandhi name, however, did not halt the decline of Congress. The party won only 112 seats (compared to 142 in the 1998 elections) and with its allies controlled only 135 votes. The BJP claimed 182 seats, and once again A. B. Vajpayee was asked to form a government. He succeeded in putting together a coalition government, the National Democratic Alliance, which controlled 298 seats in the Lok Sabha. For the first time in four years, an Indian government—albeit a coalition government— appeared to have a decisive working majority in the legislature. As the leader of the BJP's moderate wing, Vajpayee has sought to control the party's more extreme Hindu nationalist members.

This article is very good information for the students of all over India.