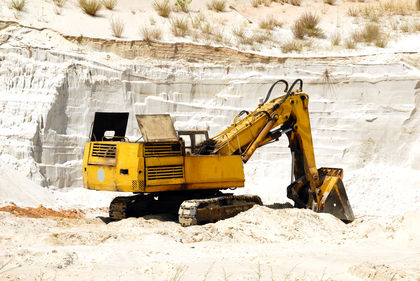 Well endowed with industrial minerals, India's leading industries in 2002 included steel, cement, mining, and petroleum, and gems and jewelry comprised the country's second-leading export commodity. The minerals industry of India produced more than 80 mineral commodities in the form of ores, metals, industrial minerals, and mineral fuels and was among the world's leading producers of iron ore, bituminous coal, zinc, and bauxite, with 10% of world deposits. In 1997, total mineral production was valued at $9.5 billion, or about 3.5% of GDP, which grew by5.4% in 2001. Mineral resources contributed 2% to GDP in 2001. Minerals accounted for 20% of exports. An estimated 4,400 mines operated in the country. Most mines were small surface operations using only handtool methods. There were also 300 underground mines in the nonfuel sector, most of which were operated manually. Employment in the minerals industry was estimated at more than 1 million (4.5% of the employed labor force), with the public sector employing 90% of the total. Total exports represented 10% of GDP in 2001, with jewelry leading the growth. The country exploited 52 minerals—11 metallic, 38 non-metallic, and three mineral fuels. Increases in production were noted for bauxite, cathode copper, crude oil, iron ore, steel, and other minerals. Industrial mineral operations were unscathed by the January 2001 earthquake in Gujarat and Rajasthan; infrastructure repairs were under way. In 2001, India also produced lead, monazite, selenium, silver, ilmenite, rutile, tungsten, uranium, zircon, corundum, garnet, jasper, asbestos, barite (from the Cuddapah District mines, Andhra Pradesh), bromine, hydraulic cement, chalk, clays (including ball clay, diaspore, fireclay, and kaolin), feldspar, fluorspar, agate, aquamarine, emerald, ruby, spinel, graphite, kyanite, sillimanite, lime, magnesite, nitrogen, phosphate rock, apatite, ocher, mineral and natural pigments, pyrites, salt, soda ash, calcite, dolomite, limestone, quartz, quartzite, sand (including calcareous and silica), slate, talc, pyrophyllite, steatite (soapstone), vermiculite, and wollastonite.

Output of iron content in mined ore totaled 50.7 million tons in 2001, up from 44.9 in 1999. Iron ore reserves, estimated at 11,000 million tons of hematite ore containing at least 55% iron, were among the largest in the world. Principal iron ore output came from the rich fields along the Bihar-Orissa border, close to all major existing iron and steel works. Smaller amounts were mined in the Bababudan Hills of Karnataka and elsewhere. The joint venture Rio Tinto Orissa Mining Ltd. studied a new mining project, in the Gandhamardan/Malanjtoli areas of Orissa, that had ore reserves of 800 million tons and could start in 2006, produce 25 million tons per year by its fifth year, and have an eventual capacity of 50 million tons per year.

India's gross weight output of bauxite was 8.4 million tons in 2001, up from 6.1 in 1998. Bauxite deposits were estimated at 2,300 million tons. The state-owned National Aluminium Co. Ltd. (Nalco), which doubled its mining capacity to 4.8 million tons per year, was to be privatized by the government in 2001. Nalco's Panchpatmali Hills, Koraput District mines, in Orissa, had a production capacity of 2.4 million tons per year.

Production of zinc concentrates (zinc content) in 2001 was 146,000 tons. The state-owned Hindustan Zinc Ltd. (HZL), which was for sale, planned to close its Sargipalli lead mine (150,000 tons per year capacity), in Orissa; HZL's Rampura Agucha mines (1.3 million tons per year lead-zinc ore capacity), in Rajasthan, were highly prized.

In 2001, 60,000 carats of diamonds were produced, up from 31,000 in 1997—industrial diamond output went from 20,000 to 43,000. Emerald and fissionable materials also were mined. Transworld Garnet India Pvt. Ltd, 74% owned subsidiary of Western Garnet International Ltd, of the United States, acquired lease rights to a mineral sands beach deposit in Andhra Pradesh with a resource base of 1.1 million tons of garnet and 0.8 million tons of ilmenite grading 24% and 20%, respectively. Western Garnet had been producing garnet in Tamil Nadu from reserves that would last for 20 to 25 years.

Content of manganese in mined ore produced was 600,000 tons in 2001. Manganese deposits were estimated at 154 million tons. Manganese was mined in Andhra Pradesh, Karnataka, the Nagpur section of Maharashtra, northward in Madhya Pradesh, along the Bihar-Orissa border adjoining the iron ore deposits, along the Maharashtra-Madhya Pradesh-Rajasthan border, and in central coastal Andhra Pradesh.

There were extensive workable reserves of fluorite, chromite, ilmenite (for titanium), monazite (for thorium), beach sands, magnesite, beryllium, copper, and a variety of other industrial and agricultural minerals. However, India lacked substantial reserves of some nonferrous metals and special steel ingredients.

The government simplified excise duties and sold its stakes in state-owned enterprises. In 2001, it approved applications for $700 million of foreign direct investment in the mining sector— poor infrastructure, delays in decision-making, labor laws, and high royalty rates were the most important factors. The West Bengal government was to give up its monopoly on mining rights and to announce a new mining policy to invite private investment; the state was known to contain apatite, coal, and dimension-stone resources. The Haryana government decided to grant mining leases for minor minerals by public auction. The new Ennore port, north of Chennai, in Tamil Nadu, was opened in 2001. A 1993 revision of the National Mineral Policy opened development of 13 minerals to private investment, both foreign and domestic. The exploration and processing of chrome, copper, diamond, gold, iron ore, lead, manganese, molybdenum, nickel, platinum-group metals, sulfur, tungsten, and zinc were exclusively controlled by the government.

i think india rocks!i think i am going to travel there one day and eat some curry! even though i have never been to asia before, i think india would be a great place to start.
2
giridhar

this article is very much useful for the student like me for the preparation of the IAS exams.It also speaks about the strength of indian economy in the sense of minerals.i think we must use our resources in a proper manner to prosper.
3
asmita mohanty

I am a m.tech student. i got some information from your article. sir iwant some more information about this.
4
S. Fayaz Ahamed

I am so happy that someone is there who are very interested in our native district and likes to visit also. I can help you if you need more information about Cuddapah district. I will be so grateful if you furnish your required information.

Being a native of Cuddapah district I am well know about the place and its importancy of each and every thing.

Hope and wish to answer your questions.

thanx for this article, It is usefull,and an example of a brlliant research work
6
Lalit

its a great article.very useful.i got A1 in my project by only writing this.