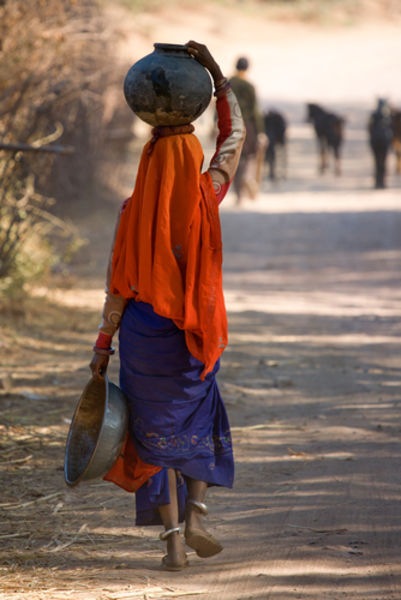 The partitioning of the South Asian subcontinent to create India and Pakistan in 1947 produced one of the great mass migrations in human history, involving some 20 million people. Historically, major migratory movements have been to and from Sri Lanka, Malaysia, Myanmar, and Bangladesh. The influx of Muslim refugees (estimated at 280,000 in 1983) from Bangladesh to Assam state has sparked protests among Hindus since the late 1970s. Persons of Indian origin domiciled abroad (excluding Pakistan) reside mainly in Sri Lanka, Malaysia, Nepal, Myanmar, South Africa, Mauritius, Trinidad and Tobago, Guyana, Fiji, the United States, and the United Kingdom. Indian minority groups in foreign countries generally do not become assimilated with the local population but live as separate groups, intermarry, and retain their own distinctive culture even after a residence of several generations.

There has been a steady migration within India from rural to urban areas. Linguistic differences limit the degree of interstate migration, as do efforts by some states to limit job opportunities for migrants and to give preference in public employment to longtime local residents. In 1999 there were around 66,000 Sri Lankan refugees located in 133 camps in the southern state of Tamil Nadu. An estimated 40,000 Sri Lankans live outside the camps. They began arriving in the early 1990s. Since 1992, 54,000 repatriated voluntarily. However, repatriation stopped in 1995 due to violence in Sri Lanka. Some 3,800 people arrived in 1998, and the arrivals continue. Indian authorities have not requested international assistance for Sri Lankan refugees, and the repatriation of Sri Lankans to their country is voluntary.

this is all true about the migration in india. the person who contributed to this site was a genius!
2
pzulo