All postal and telegraph and most telephone services are owned and operated by the government. International telephone services, both radio and cable, are available between India and all major countries of the world. In 2000, there were 27.7 million telephone lines and 2.93 million cellular phones in use.

All-India Radio (AIR), government-owned, operates short- and medium-wave transmission through 148 stations and broadcasts in all major languages and dialects for home consumption. AIR also operates external services in 24 foreign and 36 Indian languages. There are privately licensed radio stations, but they are only permitted to broadcast educational or entertainment programming. News broadcasting by independent stations is prohibited. In 1959, India's first television station was inaugurated in Delhi, and color television broadcasting was inaugurated in 1982. By the end of 1985, the government's Doordarshan television network operated 22 broadcasting centers. As of 1999, there were, altogether, 153 AM and 92 FM radio stations and 562 television stations. In 2000, there were 121 radios and 78 television sets for every 1,000 people. The School Television Section broadcasts regular in-school instruction programs on selected subjects. India has a thriving film industry, centered at Mumbai (formerly Bombay), Madras, Calcutta, and Bangalore. Indians are avid film-goers and users of videocassettes. In 2001, there were five million Internet subscribers served by about 43 service providers.

The first newspaper in India, an English-language weekly issued in Calcutta in 1780, was followed by English-language papers in other cities. The first Indian-language newspaper (in Hindi) appeared in Varanasi (Benares) in 1845. There are hundreds of newspapers in circulation throughout the country, published in some 85 languages, primarily Hindi, English, Bengali, Urdu, and Marathi. The majority of Indian newspapers are under individual ownership and have small circulations. About 30% are published in Delhi, Mumbai (formerly Bombay), Calcutta, and Madras. 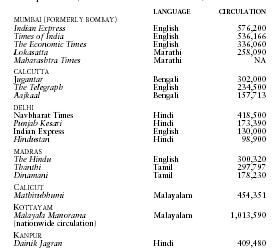 In 1976, the four leading Indian news agencies—the Press Trust of India (English), United News of India (English), Hindustan Samachar (Hindi), and Samachar Bharati (Hindi)— merged to form Samachar, which means "news" in Hindi. The merger followed the cancellation by AIR of subscriptions to all four services. Samachar was dissolved in 1978, and as of 1991 there were three separate agencies: Indian News and Features Alliance, Press Trust of India and United News of India.

Freedom of the press has been nominally ensured by liberal court interpretations of the constitution, but the government has long held the right to impose "reasonable restrictions" in the interest of "public order, state security, decency, and morality." The government's censorship of newspapers imposed in June 1975 was declared illegal by the courts, and press restrictions proclaimed by Indira Gandhi's government in 1976 were relaxed by the Janata government in 1977. The independent Press Council, which had been abolished in 1975, was restored in 1979 with the function of upholding freedom of the press. On a day-today basis, the press is essentially unfettered, and news magazines abound in addition to the newspapers.