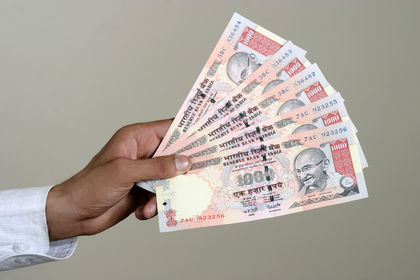 India has a chronic deficit on current accounts. What bridges the gap between payments and receipts is mainly external aid (especially nonproject assistance), tourism earnings, and remittances from Indians working abroad. Heavy imports of food grains and armament purchases caused a decline in India's foreign exchange reserves in the mid-1960s. An economic recovery from 1968–69, however, eased the problem, and by September 1970, foreign exchange reserves amounted to $616 million, as compared with $383 million by December 1965. Reserves declined to $566 million by the end of 1972 but increased to $841 million as of December 1975, despite massive deficits on current accounts, attributable to the quadrupling of oil import prices during 1973–74. Foreign exchange reserves declined from $6,739 million at the end of 1979 to $3,476 million as of November 1982 but subsequently rose to $5,924 million by March 1987. The Gulf War crisis worsened the ratio of current account deficit to GDP. Foreign exchange reserves plummeted because of export losses in Kuwait, Iraq, and other nations. Remittances from Indian workers fell, and sudden price increases for oil imports caused an estimated loss to India of over $2.8 billion in earnings. By November 1993, however, India's foreign exchange reserves had risen to $8.1 billion, the highest level since 1951. A substantial reduction in the trade deficit, increased inflows from foreign institutional investors, a stable exchange rate, and improved remittances all contributed in the recovery of reserves. Although export growth remained strong, the current account deficit tripled from 1993–94 to 1995–96. The increase was attributed to a continuing surge in imports and higher debt service requirements. However, between 1995 and 1998 the current account deficit shrank to about 1% of GDP due to increased textile exports and a liberalizing trade regime. India's total external debt in 2001 was estimated at $100.6 billion. In 2000, the external debt-GDP ratio stood at around 20.7%, down from 41% in 1991/92. In the early 2000s, India's exports to East and Southeast Asia increased, including to Japan and South Korea. High growth rates were registered for textiles, chemicals and related products, engineering goods, and leather and manufactures.

The US Central Intelligence Agency (CIA) reports that in 2001 the purchasing power parity of India's exports was $44.5 billion while imports totaled $53.8 billion resulting in a trade deficit of $9.3 billion.

The International Monetary Fund (IMF) reports that in 2000 India had exports of goods totaling $43.1 billion and imports totaling $55.3 billion. The services credit totaled $18.3 billion and debit $19.9 billion. The following table summarizes India's balance of payments as reported by the IMF for 2000 in millions of US dollars. 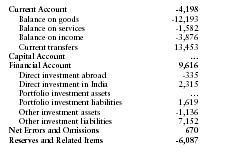 this things help me in making my project. nice work
3
Fernandez, Saul Rick

Im doing my thesis, and this information is great to do some job in it, thank you
saulrick@163.com
4
playmakr

this is really good information, will helpful for studies
6
Trishna Malik

i want to know how is government tackling the Balance of payment crisis in the present seen??Any developments done in this area by government??
7
sumathi

GOOD INFORMATION REALLY IT HELP ME LOT IN DOING THE PROJECT