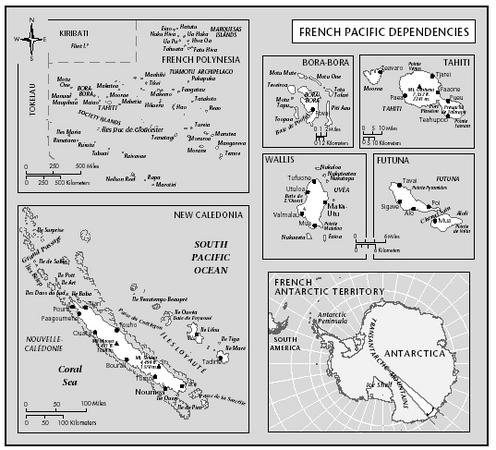 plant life is abundant; among the plants unique to the territory is niaouli, a tree of the eucalyptus family whose leaves are processed for the pharmaceutical industry.

Total population in 2002 was estimated to be 207,858, of whom 42.5% were native Melanesians and 37% were Europeans. French and various Melanesian and other local languages are spoken. Roman Catholicism is the majority religion.

New Caledonia was discovered in 1768 by Louis Antoine de Bougainville and was named by James Cook, who landed there in 1774. Local chiefs recognized France's title in 1844, and New Caledonia became a French possession in 1853. In 1946, it became a French overseas territory, and in 1958, its assembly voted to maintain that status. Under 1976, 1984, and 1985 laws, New Caledonia is administered by an appointed high commissioner, an executive council, and a 54-seat territorial congress, consisting of the membership of the three provincial assemblies. New Caledonia has two representatives in the French national assembly and one in the senate. The territory is divided into three provinces (Îles Loyauté, Nord, and Sud); municipal communes play a role in primary education and social welfare.

The economy is based on agriculture and mining. Coffee, copra, potatoes, cassava, corn, wheat, and fruits are the main crops, but agricultural production does not meet the domestic demand. New Caledonia is the fourth largest producer of ferronickel in the world, after Canada, Indonesia, and Russia. Nickel mining and smelting accounted for an estimated 12% of GDP and 80% of export earnings in 2000. New Caledonia has approximately 25% of the world's known nickel reserves. Coffee, copra, and chromium make up most of the other exports. Trade is mainly with France, Australia, Japan, and the United States. In 2000, exports totaled US $400 million, imports totaled US $1 billion.