Voyagers from the east settled Fiji at least 2,500 years ago. Some of their descendants later moved on to settle the Polynesian islands to the west. The first known European contact came when the Dutch navigator Abel Tasman sighted the Fiji group in 1643. English Captain James Cook visited it in 1774, and Charles Wilkes headed a US expedition there for three months in 1840.

European sandalwood traders, army deserters, and shipwreck survivors also landed on the islands during the first half of the 19th century, a period in which the chiefs of Bau rose to a dominant position. Protestant missionaries from Tonga arrived in 1835, and French Catholic priests in 1844. After a few chiefs had been converted, more and more Fijians embraced Christianity, usually in the form of Wesleyan Methodism.

In the course of a civil war in the 1850s, Cakobau, the most powerful chief in Fiji, combined forces with the king of Tonga to become paramount chief of western Fiji. The growing presence of Europeans contributed to political and economic instability. In 1871, some 3000 Europeans supported Cakobau's claim to rule as king of all Fiji, but unrest continued. Cakobau's government appealed to Britain for assistance and, on 10 October 1874, Fijian chiefs signed a Deed of Cession making Fiji a British Crown Colony.

From 1879 to 1916, more than 60,000 indentured laborers from India arrived to work on European-owned sugar plantations, and by 1920 they had settled as free farmers. European settlers were granted elective representation in the Legislative Council in 1904, and Indians were admitted in 1929. Ethnic Fijian representation was based on traditional hierarchies until 1963, when the council was reconstituted; the franchise was extended to women, and direct election of Fijian members was provided for. In 1966, the council was enlarged and again reconstituted, and Fiji attained virtual internal self-government.

On 10 October 1970, Fiji became a sovereign and independent state within the Commonwealth of Nations, with Kamisese K. T. Mara, head of the Alliance Party, as prime minister. He and his majority party won elections in 1972, 1977, and 1982, but lost the April 1987 elections to a coalition of the Indian-based National Federation Party and the Labour Party. The new government was short-lived, however. Within a month, it was toppled by a military coup led by Lt. Col. Sitiveni Rabuka and aimed at restoring political leadership to ethnic Fijians. On 20 May thousands of rioting Fijians attacked Indians. Under a compromise reached the next day, the governor-general temporarily was to head the government, assisted by an 18-member advisory council, including the coup leader and former Prime Minister Mara. Elections were to be held within six months, and the council was to propose constitutional revisions that would safeguard the political dominance of indigenous Fijians.

On 25 September 1987, however, Rabuka led a second coup. He subsequently suspended the constitution, dissolved the parliament, and declared Fiji a republic. The governor-general, Ratu Sir Penaia Ganilau, was appointed president of the republic, and Mara was reappointed prime minister. Full civilian rule returned in January 1990 when Rabuka gave up his position as minister of home affairs and returned to barracks as head of the armed forces.

The second coup in 1987 and the adoption of the 1990 constitution, which favored ethnic Fijian control of the government, led to heavy Indian emigration, especially among those Indians with sufficient capital to move. This emigration caused serious economic difficulties for Fiji, but it also ensured that the native Fijian population became the majority. In May of 1992 the Soqosoqo ni Vakavulewa ni Taukei (SVT) or the Fijian Political Party, led by now Major-General Rabuka, won 30 of the 37 seats reserved for ethnic Fijians. Rabuka formed a coalition government with the General Voters Party (GVP) and with the informal support of the Fijian Labour Party (FLP), and became prime minister. After President Ganilau's death in December 1993, the Council of Chiefs elected Ratu Sir Kamisese Mara as the new president in January 1994. Rabuka's government fell in November 1993 when the legislature defeated the government's 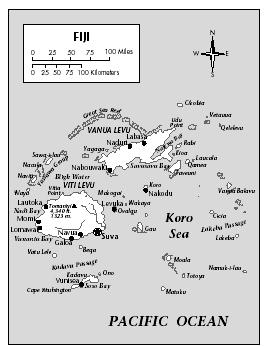 budget. New elections were held in February 1994. The SVT won 31 seats, and Rabuka was able to form a coalition government with the GVP. However, Rabuka's hold on power was tenuous as pressure mounted from within and outside the country for constitutional reform.

Beginning in 1995, a Constitutional Review Commission spent almost two years to develop a system that would avoid purely ethnic politics and, at the same time, take account of the concerns of the native Fijian community. Its recommendations were unanimously adopted by Parliament in July 1997. In 1999, parliamentary elections were held that resulted in a government led by Mahendra Chaudhry, leader of the Fiji Labour Party (FLP), who became the first Indian prime minister of Fiji.

On 19 May 2000, George Speight, a failed businessman and son of Sam Speight, an opposition member of Parliament, took Parliament by show of force and held Prime Minister Chaudhry and most of his multiracial cabinet hostage for 56 days. In exchange for the hostages' release, the military—which imposed martial law during the crisis—agreed to replace Chaudhry's government, grant an amnesty to the rebels taking part in the coup, and to abolish Fiji's multiracial constitution. One of Speight's demands was a new constitution that would only permit indigenous Fijians to hold the posts of prime minister and president. The coup resulted in widespread civil unrest and attacks against ethnic Indians, and caused a drop of 41% in tourism. Speight and 369 of his supporters were arrested in July 2000, and the military installed ethnic Fijian Laisenia Qarase as prime minister in a caretaker government. He was charged with organizing Fiji's next general election and drawing up a new constitution. Fiji's Great Council of Chiefs appointed Ratu Josefa Iloilo—a former father-in-law of Speight's brother—president.

Eighteen political parties fielded 351 candidates for office in parliamentary elections held in August and September 2001. Qarase was elected prime minister as the head of his newly created party, the nationalist Soqoso Duavata ni Lewenivuana Party (Fijian United Party or SDL), which took 32 out of 71 parliamentary seats. Qarase's campaign focused on indigenous Fijians' fears of political domination by ethnic Indians, who make up 44% of the population. Almost all ministers in Qarase's new government were indigenous Fijians. In February 2002, the Fijian Supreme Court ruled that Laisenia Qarase had to include ethnic-Indian members of the Fiji Labour Party in his cabinet.

Speight won a seat in Parliament while facing treason charges in court, but was later denied parliamentary status. He was originally sentenced to death for treason in February 2002, but the sentence was commuted to life imprisonment.

As of January 2003, more than 14,000 ethnic Indians left the country since the May 2000 coup, mainly professionals and skilled workers.

My great grandfather was of Fijian / Melanesian origin and had a wife and a family while he came to recruite workers from India. However, he left Sri Lanka in the early 1900 to India inorder to travel back with workers to Fiji. He was with the British / Wesley priests perhaps with another white nationale. Could you please help track the history of Fiji migration to Sri Lanka. This will be of great help as I am really interested to trace my roots.
Thanks in advance.
2
inez

Hi
I have been very greatly to Rt Cakobao for ceding Fiji over to Great Britain because if it was not for the Europeans we as Fijians will just continue with the kinds of lifestyle that our ancestors used top live in.