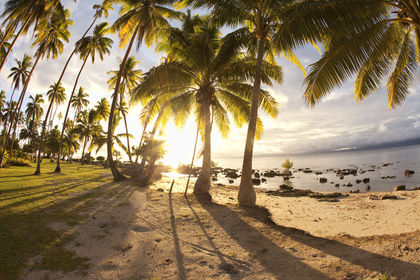 In 2001, agriculture comprised about 30% of Fiji's export earnings. More than three-quarters of all households engage in agriculture, livestock production, forestry, or fishing. A total of 285,000 ha (704,000 acres), or over 15.6% of Fiji's area, was used for crop production in 1998. Sugarcane production was 4,398,000 tons in 1999. In 2001, sugar exports accounted for about 21% ($112.2 million) of total exports and 70% of agricultural exports. Fijians retain legal ownership of the lands, but Indians farm it and produce about 90% of Fiji's sugar. In 1995, the average sugarcane farm was four ha (9.9 acres), produced 183 tons of cane, and made F $9.810. Cane is processed into raw sugar and molasses by the Fiji Sugar Corporation, which is 68% owned by the government. The sugar industry is vital to the national economy; as such, the government plays a leading role in all aspects of its production and sale.

Production of copra and coconuts in 1999 was 12,000 tons and 209,000 tons, respectively; paddy rice output was 18,000 tons. Corn, tobacco, cocoa, ginger, pineapples, bananas, watermelons, and other fruits and vegetables are also grown.

I'm doing a report on Fiji, and this web site has been very great! Thankyou very much.

I have to been doing a report in fiji and this site is great with agriculture thx. Also another great site is the cia fact book
3
T+K+G+R

This was a great help for our human sciences project. Thanks !
4
Setaita Bevu

THANKS 4 THIS ARTICLE. IT HAS GIVEN ME SOME HINTS ON THE LATEST TREND IN AGRICULTURE IN FIJI. THANKS A LOT.
5
Jackie Vee

Thax for the information it really helped me in my science fair which had the topic of 'sustainability fiji'. I was working on the advantages and disadvantages of farming and ho much land it has used so i just want to give a big thank you and vinaka vakalevu!!!
[=
6
Audrey

This has helped so much in my presentation that I am preparing for... Vinaka!!!
7
rtesh

this site is so awesome... i am doing a project for agriculture and this site helped soo much!

this is a really good website. but could you please say where they export to and import from. thanx that would be great,.
11
veicai

Im veicai from Fiji. I work for the Veivutu Institute of Fiji - we have been doing a lot of research on agriculture. Other locally owned institute such as Magaijinana, Caijitamana and Sonalevu have found great interest on this site.. good job guys!!
12
Trev Hughes

this was real help for a agriculture project!
thanx..
13
saimoni kalokalo

starting a farm and need some information on exports...need a buyer from overseas to export direct.
14
reshma ranjita lal

This site is very useful for research presentations:)
17
elisabeta waqa

great information, but is there any latest update on figures shown??? much needed...
18
shonal

Thank you for the useful information.It has helped in compiling information on Fiji's agricultural sector
19
manen karti

I am doing an assignment on fiji's agriculutre and economy and thankyou very much. this site has provided me with more background on the fiji's agriculture. i will acknowledge and appreciate that.