Since the mid-to-late 1500s, the island of Timor and its lush offering of sandalwood lured both Portuguese and Dutch explorers, who contested for the territory until an official territorial division was determined through the Sentenca Arbitral in April 1913. Unlike the Dutch, Portugal's sphere of influence was concentrated in the local leadership of the East Timorese "liurai rei": rulers, chieftains and biracial families known as the "Black Portuguese" who were of Timorese and Portuguese parentage. While Portugal's colonial hold on East Timor failed to avail the local population of educational and general advancement opportunities, even leaving the island with barely 30 km (19 km) of paved asphalt road, its detachment enabled the East Timorese cultural identity to remain largely intact and unscathed by modernity.

Ironically, efforts to crush the East Timorese are not traced to the Portuguese, but to the Indonesian people and their brutal tactics for integration following Portugal's exodus from the island. When the "Carnation Revolution" of April 1974 prompted the demise of nearly fifty years of dictatorship in Portugal, the decolonization of East Timor, among Portugal's other colonies, seemed a favorable consequence. By the start of May 1974 three political parties surfaced within the island: the Apodeast Timori (Timorese Democratic People's Union), largely a device of the Indonesian government that advocated that East Timor be integrated into Indonesia; the UDT (Democratic Union of Timor), advocating a progressive process of autonomy under Portugal; and the ASDT (Timorese Social Democratic Association), which later became the left-wing independence movement Fretilin (Revolutionary Front for an Independent East Timor), advocating the island's total independence.

The subsequent union and mounting popularity of UDT and Fretilin by January 1975 proved threatening enough to the Indonesian government that President Suharto, whose integrationist stance was already endorsed by the United States, Australia, Japan, and other nations, justified his military intervention in East Timor through the "Operasi Komodo." Authored by the president's intelligence-supremo Ali Moertopo (1924–84), Operasi Komodo essentially slandered Fretilin as being secretly Communist and served to splinter its alliance with the UDT by May. Consequently, on 6 June 1975, Indonesia already occupied the Oecussi-Ambeno enclave under the guise of restoring order in East Timor, which had not endured any form of foreign occupation with the exception of a brief but brutal occupation by the Japanese during World War II (1939–34).

Despite Indonesian presence and pressure within East Timor, Fretilin still gained 55% of the popular vote in local elections on 29 July 1975. Thus again threatened, Indonesia manipulated the UDT to counter Portuguese authority and Fretilin's influence through a coup staged from 11 August through 24 September 1975. However, the coup against Fretilin failed; in fact, Fretilin instead gained control of the entire East Timorese territory and launched humanitarian advancements (in education, medical treatment, and local decision-making) that had been historically denied to the islanders. Still, reports generated by the US Central Intelligence Agency discerned Indonesian infiltration and fighting within East Timor and around its borders during mid-September and through October 1975. After capturing the violence on videotape, four foreign journalists were executed by Indonesian militia on 17 October 1975 and tension between pro- and anti-independence forces was heightened. On 28 November 1975, Fretilin's formal assertion of an independent state of East Timor was answered the very next day by Moertopo's "petition" for the integration of East Timor into Indonesia through the "Balibo" Declaration, which UDT leaders were forced to sign.

On 7 December 1975, only one day after a visit to Jakarta by President Gerald Ford and Secretary of State Henry Kissinger of the United States, Indonesia deployed 10,000 troops—by sea, air, and land—into Dili after an already devastating naval and aerial bombardment led by General Benny Murdani. Within days of an invasion marked by public torture, rape, and the random killing of mass civilians, Portuguese governor Mario Lemos Pire and his remaining administration made a covert and final exodus during the night to the island of Atauro, marking the end of over 460 years of colonization, without decolonization achieved. On 17 July 1976, Indonesia claimed East Timor its 27th province despite condemnation from the United Nations, and it continued full-scale attacks through March 1979 through weaponry largely supplied by the United States under the administration of President Jimmy Carter. Within a year of the attack, an estimated 60,000 East Timorese had been killed, while tens of thousands sought refuge from the Armed Forces of the Republic of Indonesia (ABRI) in the rugged mountainous interior of East Timor, where Fretilin guerrilla forces remained; others were forced into Indonesian resettlement camps, where disease, malnutrition, and death were rampant. The island was relegated to a "closed colony" status by the military from December 1975 through 1 January 1989.

It has been estimated that some 250,000 were killed since 1975 when warfare seized the island. Mass terror and killings were widespread, including 1,000 in Aitana in July 1981, 400 in Lacluta in September 1981, and, finally securing international 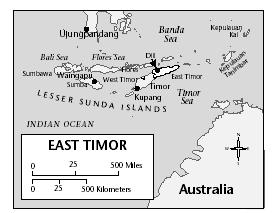 attention, some 270 during the Santa Cruz massacre of 12 November 1991, in which peaceful mourners and demonstrators were killed by Indonesian troops' open fire in a cemetery in Dili. While Indonesia experienced a shift in leadership with the forced resignation of President Suharto in 1997 and rise to power of his vice president, B. J. Habibie, East Timor endorsed Fretilin leader José Alexandre "Xanana" Gusmão, then the president of the National Council of Timorese Resistance (CNRT). Their continued resistance against military occupation and terror, coupled with heightened international scrutiny of the atrocities within the island, may have prompted Habibie in January 1999 to extend the choice to East Timorese citizens: autonomy under Indonesian rule, or outright independence. An overwhelming 99% of eligible voters were present during the 30 August 1999 referendum, which secured the vote for independence.

However, postelection violence and killings led by pro-Indonesian militias and the army, which killed more than 1,000 people and drove some 250,000 from East Timor following the election, were a dark reminder of East Timor's subjugation to the Indonesian military, which has long remained the source of ultimate government authority. Following a unanimous decision on 25 October 1999 by the UN Security Council, East Timor was governed by UNTAET (the United Nations Transitional Administration in East Timor) and the National Consultative Council (originally formed by 15 East Timorese whose representation was later increased to 33), with the mission to rebuild the island and establish a new government by the close of 2001. In September 2001, a constituent assembly was elected, and given with the task of writing a constitution for East Timor. In April 2002, José Alexandre "Xanana" Gusmão defeated Xavier do Amaral for the presidency, and on 20 May 2002 East Timor became an independent nation. A successor mission to UNTAET, the United Nations Mission of Support in East Timor (UNMISET) was established to provide assistance to East Timor over a period 12 months, especially in matters of law enforcement and security. East Timor became the 191st UN member state on 27 September 2002.

As of December 2002, there were an estimated 30,000 remaining of the 250,000 people who, after the violence of September 1999, first arrived in settlement camps found along the countryside of West Timor, largely around the town of Atambua. More live outside the camps or elsewhere in Indonesia. The Indonesian government and the office of the UN High Commissioner for Refugees declared that all East Timorese residing in Indonesia would lose their refugee status after 31 December 2002.

Indonesia's attempts to bring to justice those responsible for the 1999 violence in East Timor have been heavily criticized. Under intense international pressure, Indonesia set up a special human rights court to try those responsible for the violence. The court's record—in both investigating the involvement of Indonesia's most senior security officials and its apparent willingness to acquit others with what is considered overwhelming evidence against them—has been condemned. As of 20 January 2003, the court had indicted eighteen suspects for atrocities in East Timor: four were convicted, eleven acquitted, and three cases were still being heard.

Bishop Carlos Ximenes Belo, who shared the Nobel Peace Prize with José Ramos Horta in 1996, announced his resignation in November 2002. He won the prize for his stand in defense of Timorese rights. In 1999, militia gangs attacked and burned his residence where hundreds of refugees were being sheltered. In December 2002, the Indonesian human rights court sentenced the first Indonesian military official convicted in the 1999 violence for failing to prevent pro-Indonesian militiamen from attacking Belo's home. The official, Lt. Col. Soedjarwo, was sentenced to five years in prison.

Disputes between Australia and Indonesia over parts of the oiland gas-rich seabed of the Timor Sea led to the signing of the 1989 Timor Gap Treaty, which resulted in a 50–50 split of the royalties from the shared zone of undersea exploration between Australia and Indonesia. In May 2002, the treaty was renegotiated, and newly independent East Timor was granted 90% of the royalties, with Australia receiving 10%. However, the terms of the agreement were conditional on East Timor foregoing its territorial claim to almost the entire oil and gas field. Foreign officials estimate a potential revenue flow of several tens of millions of dollars a year to East Timor.