The fiscal year follows the calendar year. Import duties and income tax are the principal sources of government revenue. The principal ordinary expenditures are education, defense, and police and fire services. Due to the introduction of a value-added tax and a more efficient tax collection system, Cyprus made steady progress in reducing its budget deficit in the early 1990s, which reached 1% of GDP in 1995. The deficit, however, due in part to a slowing economy, is now again on the increase.

Turkish Cypriots use the Turkish lira for currency, and the Turkish government reportedly provides a large part of the TRNC annual budget.

The following table shows an itemized breakdown of government revenues and expenditures in millions of US dollars. The percentages were calculated from data reported by the IMF. 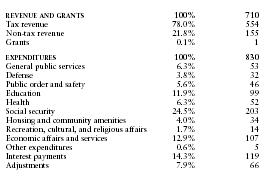