Since Cyprus has persistently imported more than it exports, it consistently runs a trade imbalance which has grown steadily over the past two decades. Cyprus' trade deficit has been somewhat offset by tourist dollars, spending by foreign military forces, and remittances from workers abroad.

The International Monetary Fund (IMF) reports that in 2001 Cyprus had exports of goods totaling $977 million and imports totaling $3.53 billion. The services credit totaled $3.35 billion and debit $1.19 billion. The following table summarizes Cyprus's balance of payments as reported by the IMF for 2001 in millions of US dollars. 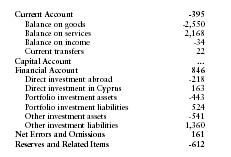