The annual state budget is prepared by the Ministry of Finance and approved by the National People's Congress. A major reform in public finance, introduced in 1980, was a new system of allocating revenues and expenditures between local and national levels of government. Previous revenue-sharing procedures allowed the central government to fix maximum spending levels for each province, autonomous region, and centrally administered municipality. The new system fixed for a five-year period the proportion of local income to be paid to the central government and (except for emergency appropriations for floods and other such disasters) the level of subsidies to be provided by the central government, as well as the proportion of local income to be retained by local governments. Autonomous regions receive proportionately greater state subsidies than the provinces and centrally administered municipalities, and they are entitled to keep all revenues from local industrial and commercial taxes.

During the 1990s, the Chinese consolidated budget deficit grew at a rapidly increasing rate. According to the IMF, the 1998 budget deficit amounted to 4% of GDP, due to rising expenditures and tax evasion. Deficits are largely financed by domestic debt issuance rather than by money creation. In 1999, the central government performed an audit of embezzlement, finding that some $2.4 billion in state funds had been diverted into private bank accounts, and that a total equaling one-fifth of the central government's tax revenues were misused. In all, the government's liabilities were equal to 100% of GDP in 2000, according to some sources. Annual tax revenues equal 13% of GDP, one-fifth of which goes annually to paying interest on government debts. 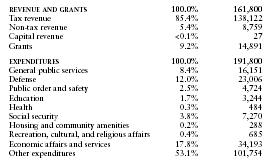 Who finances the public debt of China? Does it borrow money from the other states or resumes to internal financing?