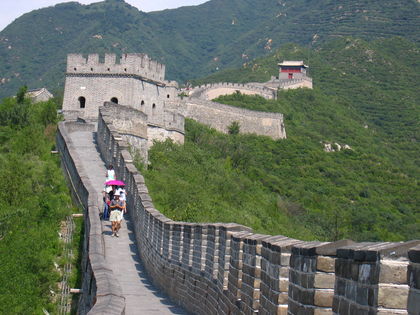 The People's Republic of China (PRC), the third-largest country in the world after the former USSR and Canada and the largest nation in Asia, claims an area of 9,596,960 sq km (3,705,406 sq mi), including Taiwan, which the PRC claims as a province; the major administrative divisions, excluding Taiwan and the offshore islands, cover 9,444,292 sq km (3,646,448 sq mi). Comparatively, the area occupied by China is slightly larger than the United States. The mainland has an extension of 4,845 km (3,011 mi) ENE – WSW and 3,350 km (2,082 mi) SSE – NNW . The mainland's 5,774 km (3,588 mi) coastline, extending from the mouth of the Yalu River in the northeast to the Gulf of Tonkin in the south, forms a great arc, with the Liaodong and Shandong peninsulas in the north protruding into the Yellow Sea and the Leizhou Peninsula in the south protruding into the South China Sea. China's territory includes several large islands, the most important of which is Hainan, off the south coast. Other islands include the reefs and islands of the South China Sea, extending as far as 4° N . These reefs and islands include Dongsha (Pratas), to which Taiwan has also laid claim. China's claims to the Xisha (Paracel) and Nansha (Spratly) archipelagoes are also in dispute. In 1986, the United Kingdom agreed to transfer Hong Kong to the PRC in 1997; in March 1987, the PRC and Portugal reached an agreement for the return of Macau to the PRC on 20 December 1999.

China is bordered on the N by Mongolia (Mongolian People's Republic–MPR) and Russia; on the NE by the Democratic People's Republic of Korea (DPRK); on the E by the Yellow and the East China seas; along the southern border are Hong Kong, Macau, the South China Sea, the Gulf of Tonkin, Vietnam, and Laos; on the SW by Myanmar, India, Bhutan, and Nepal; on the W by India, Jammu and Kashmir (disputed areas), Pakistan (west of the Karakoram Pass), and Afghanistan; and on the NW by Tajikistan, Kyrgyzstan, and Kazakstan. China's total boundary length, including the coastline (14,500 km/9,010 mi) is 36,647 km (22,771 mi). China's capital city, Beijing, is located in the northeastern part of the country.

I'm absolutely amazed at the statistics for China; particually the population numbers. Considering that China is classed a 'less well off' country, I can't believe that it has the largest population numbers of any country! Plus this statistic is still growing at a very fast rate I believe. Does anyone have any ideas WHY this is?
I thought it was China that has a one child rule with regards to the 'trade of young infants?
2
Brittany

this is just what i needed for my location. Thanks! CHINA IS COOL!
4
Colleen

This was really useful information. I found out a lot about China for both my project and general knowledge. I recommend this site for any beginners who are curious about China.
6
Ali.L

This website is a really GOOD site to go on.I would recemend this site for anyone who is curious about China!
7
Bec

Thks a bunch, this is helping me quite a bit. Although this site does need a bit of work still. Its cool and has a lot of info in it.
8
Wildy

THE REASON WHY CHINA'S POPULATION IS SO BIG!!!...
even though it has the "one child per family" law, china has a crazy wide variety of natural resources found there. People don't really have to migrate or move anywhere because they have all they need right there, and in abundance. actually, if anything, china's population is lessening because the population pyramid is pretty much up-side-down. there are way less older Chinese (that live in rural areas with limited nursing homes) and more and more young women that believe they should start their careers around 20 years of age when they usually would start a family. then they get too old to have children. china is too technologically advanced!
9
Natasha

This site helped me alot ! Although they could mention china's population..
10
Hunter

This site was good.It's just that i need the usefulness of China's natural resources for my Country report.
11
Abdulmalik

China is so realy higherly populated no any amazing about that and i realy wish to be in shaigai or beiging or other big big cities of china, iam from nigeria