It is estimated that China has lost one-fifth of its agricultural land since 1957 due to economic development and soil erosion. Since 1973, China has taken significant steps to rectify some of the environmental damage caused by rampant use of wood for fuel, uncontrolled industrial pollution, and extensive conversion of forests, pastures, and grasslands to grain production during the Cultural Revolution. Reforestation, including construction of shelter belts, has emphasized restoration of the erosion-prone loesslands in the middle reaches of the Yellow River. In 1979, the Standing Committee of the Fifth National People's Congress adopted an Environmental Protection Law and a Forestry Law. In 1989, China began a nationwide program called the Great Green Wall of China which began to accelerate the rate of reforestation. In 1995, China had 133,323 ha of forest land.

Water supplies are limited—per capita consumption in China's cities is about 34 gallons a day, less than half that in many developing countries—and conservation, reclamation, and redistribution of water constitute major national priorities. Safe drinking water is unavailable to much of the population (as much as one-third, according to some estimates). By 1989, 436 of 532 rivers were polluted. In 1994, the World Health Organization reported that Chinese cities pollute water supplies more than those of any other country in the world. Legislation provides for the protection of aquatic resources, including water quality standards for farmland irrigation and fisheries. To alleviate water shortages in the heavily populated Beijing-Tranjin region, a massive water transfer project from the Yangtze River to the north by means of a dam, first proposed in the 1930s, has been seriously reconsidered in recent years. The project has aroused considerable controversy because hundreds of thousands of people would be uprooted, prime farmland flooded, many archaeological treasures submerged, and the ecology of the river area damaged.

The use of high-sulfur coal as a main energy source causes air pollution and contributes to acid rain. In the mid-1990s, China had the world's second highest level of industrial carbon dioxide emissions, totaling 2.67 billion metric tons per year, a per capita level of 2.27 metric tons per year. Investment in pollution-reducing technology is required of all industrial enterprises. Penalties are imposed for noncompliance, and incentives, in the form of tax reductions and higher allowable profits, are available for those enterprises that meet environmental standards. Beijing has implemented programs for controlling discharges of effluents, smoke and soot emissions, and noise pollution. Special success has been claimed for the recovery of oil from effluents of the Daqing oil field in Heilongjiang, refineries, and other oilprocessing establishments; use of electrostatic precipitators and bag collectors by the cement and building industries; recovery of caustic soda and waste pulp from effluents of the pulp and paper industries; introduction of nonpolluting processes into the tanning and depilating of hides; use of nonmercuric batteries; recovery of fine ash from coal-burning power plants for use in the manufacture of bricks, tiles, cement, and road-surfacing materials; and development of new methodologies for recycling coal wastes and marine oil discharges. 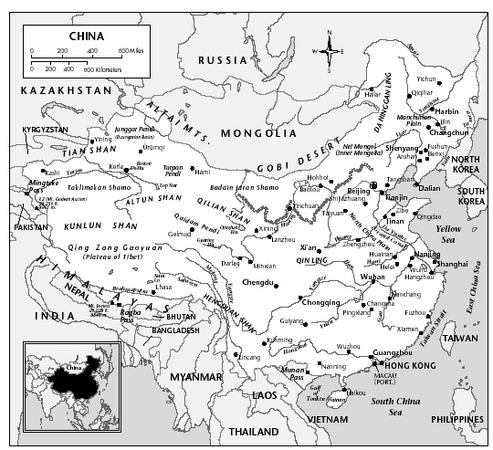 Changbai Mountain Nature Reserve, in the northeast. Others include the Wolong reserve in Sichuan Province, covering 200,000 ha (494,000 acres) and famous for its research on the giant panda; the Dinghu Mountain reserve in Guangdong Province, where a subtropical evergreen broadleaf monsoon forest that has remained virtually untouched for four centuries provides opportunities for ecological studies; and the Nangun River area in Yunnan Province, where the principal focus of protection is the tropical rain forest.

In 2001, 75 species of mammals out of 400 were endangered along with 90 species of birds and 113 plant species. Trade in endangered species has been reported.