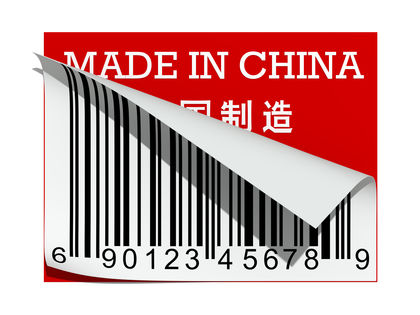 Both foreign trade and international financing in China are state monopolies, with policies and transactions administered by the People's Bank of China (PBC). Among its various functions, the PBC sets exchange rates for foreign currencies. The PBC releases foreign exchange to the Bank of China, which plays a major payments role through its branches in Hong Kong, Singapore, and other overseas financial centers. The government has, overall, maintained a record of financial stability, linked to a policy of stringent controls over its international transactions. Adhering generally to a principle of self-reliance, it has resorted to the use of commercial credit at certain junctures but until the 1970s avoided falling into long-term indebtedness as a means of financing major development goals. In the period 1958–60, the Great Leap Forward and the succeeding years of economic crisis caused a sharp deterioration in China's international payments position. In 1960, large negative clearing account balances with Communist countries (-$625 million) were even more than the foreign exchange reserves of $415 million. By the end of 1964, however, the negative balance with Socialist nations had been reduced to $55 million, and China's net international financial resources stood at a surplus of $345 million, owing to monetary gold holdings of $215 million and foreign exchange balances from trade with non-Communist countries amounting to $185 million. By 1965, the Chinese had completely cleared their long-term debt to the former USSR, and by 1968, China had redeemed all national bonds and was free of all long-term external and internal debts. Publication of official balance-of-payments statistics was discontinued during the Cultural Revolution and not resumed until September 1985. According to Western analyses, the period 1978–81 saw a continuing surplus in current accounts, as rising levels of imports were generally matched or exceeded by increases in exports over the same period. In addition, transfers of an estimated $1.1 billion in 1978 and $1 billion in 1980, derived from increased earnings in tourism, shipping, and remittances from Hong Kong and other sources, resulted in overall current accounts surpluses of $900 million and $1.2 billion in 1978 and 1980, respectively. China's drive to industrialize under the Four Modernizations policy resulted in an unprecedented deficit on capital accounts of $1.1 billion in 1978. The subsequent unilateral decisions to cancel $2.6 billion in contracts with Japan (1979) and $2 billion with Japan and Western nations (1981) were interpreted by some observers as an indication of acute cash-flow problems and a reordering of investment priorities at the highest levels. The trade account was helped by the slow but steady devaluation that occurred after China went to a managed float exchange rate system in January 1991. Tourism receipts and visitor figures also continued to grow, passing pre-Tiananmen levels. Foreign investment boomed in the 1990s, with a total of nearly $45 billion committed in 1998 alone. Approximately half of China's loans came from the Asian Development Bank, the World Bank, and Japan; external debt reached $159 billion in 1998. A usually positive current account balance stockpiled China's reserves. In 1998, China had some $147 billion in official reserves, but state industries had accumulated a huge amount of what was called triangular debt with the state banks and other lending agencies. Government infrastructure and industrial projects received funding for goods that could not be sold domestically in 1999 due to lower demand, losing money for each party involved. In effect, external trade plays a secondary role in China's economy because of normally high, unsatisfied domestic demand. Agreements with the WTO threaten to increase China's dependence on foreign trade. China's external debt stood at $149.4 billion in 2002.

The US Central Intelligence Agency (CIA) reports that in 2002 the purchasing power parity of China's exports was $312.8 billion while imports totaled $268.6 billion resulting in a trade surplus of $44.2 billion.

The International Monetary Fund (IMF) reports that in 2001 China had exports of goods totaling $266 billion and imports totaling $232 billion. The services credit totaled $33.3 billion and debit $39.3 billion. The following table summarizes China's balance of payments as reported by the IMF for 2001 in millions of US dollars. 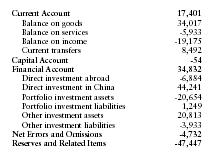