From the 14th to the 16th century, Brunei was the center of a powerful native sultanate occupying what are now Sabah and Sarawak and extending northward through the Philippines almost to Manila. By the 19th century, much of this empire had been whittled away by war, piracy, and the colonial expansion of European nations. In 1847, the sultan concluded a treaty with Great Britain for the suppression of piracy and furtherance of commercial relations. In 1888, Brunei became a British protectorate, and in 1906 a resident British commissioner was established. By a 1959 agreement (amended in 1971), Brunei was recognized as fully self-governing, with Britain retaining responsibility for defense and foreign affairs. Brunei's first elections, held in 1962, resulted in a victory for the Brunei People's Party, militant nationalists who denounced Brunei's entry into a proposed federation with Malaysia, which had attained independence in 1957. Prevented from taking office, the nationalists, with Indonesian backing, revolted against Sultan Omar Ali Saifuddin in December 1962; the revolt was quickly put down with British assistance, but the sultan decided against federation in any case. From that time on, the sultanate has ruled by decree under a national state of emergency. In 1967, Sultan Omar abdicated in favor of his son, Muda Hassanal Bolkiah. Sultan Omar, who after his abdication remained as defense minister and assumed the royal title of Seri Begawan, died in 1986.

During the 1970s, Brunei emerged as the richest state in Southeast Asia, profiting from its oil wealth and the steep increases in international oil prices. Much of this vast oil income has been expended by the state on modernization and social services. Brunei renegotiated its treaty with the United Kingdom in mid-1978 and, on 7 January 1979, concluded a new treaty providing for independence within five years.

On 1 January 1984, the country attained full independence and was also proclaimed a member of the British Commonwealth. On 7 January 1984 Brunei joined the Association of South-East Asian Nations (ASEAN) and joined the United Nations in the same year. Brunei is also a member of the Organization of Islamic Conference.

In 1985 a new political party was formed, the Brunei National Democratic Party (BNDP), comprised predominantly of businessmen loyal to the Sultan. However, government employees were forbidden by the Sultan to join. The Chinese community was also excluded from membership. In 1986 an offshoot of the BNDP was formed, the Brunei National United Party (BNUP), which emphasized greater cooperation with the government. The BNUP favored the establishment of an elected prime-ministerial system, however. The BNUP's membership was open to Muslims and non-Muslims, but still excluded Chinese. In 1986, Brunei was solicited by the US government to aid the Nicaraguan Contras, but the $10 million donation was credited to the wrong bank account and never reached its intended destination. The donation was eventually traced and returned to Brunei with interest.

In 1988 the top two leaders of the BNDP, President Haji Abdul latif bin Abdul Hamid and Secretary-General Haji Abdul Latif bin Chuchu, were arrested as they were about to fly to Australia. They were held under the Internal Security Act, which allows detention for up to two years without charges being filed, and were detained until 1990. In May of that year, Haji Abdul latif bin Abdul Hamid died. In 1990 the government released six other political prisoners who had been detained since 1962.

Increasing emphasis on Melayu Islam Beraja (MIB) as a state ideology has resulted in the affirmation of traditional values due to increasing concern about an affluent and worldly younger generation. In 1991 the import of alcohol and the public celebration of Christmas were banned. His Majesty Sultan Haji Hassanal Bolkiah Mu'izzaddin Waddaulah celebrated 25 years on the throne in October 1992. Once taken to be the richest man in the world, as of 2001, the Sultan was listed by Forbes magazine as one of the fifteen wealthiest individuals in the world, with US $16 billion.

Brunei established diplomatic relations in 1993 with China, Vietnam and Laos.

In 1998 Brunei's economy was hit simultaneously by falling oil prices, regional currency depreciation stemming from the region's economic crisis, and the collapse of the multibillion-dollar Amedeo conglomerate run by the Sultan's brother, Prince Jefri Bolkiah, who was removed from his post as the country's finance minister. However, tensions persisted between the Sultan and his brother, who fled to London. Upon his return in early 2000, the government sued him and dozens of other persons for misuse of public funds.

As the new century began, Brunei was looking for ways to diversify its heavily petroleum-dependent economy as its oil and gas reserves waned.

In November 1999, Brunei and the nine other members of the Association of Southeast Asian Nations (ASEAN), agreed informally to create a free-trade zone by eliminating duties on most goods traded in the region by 2010. When ASEAN met in November 2002, the Southeast Asian leaders and China began 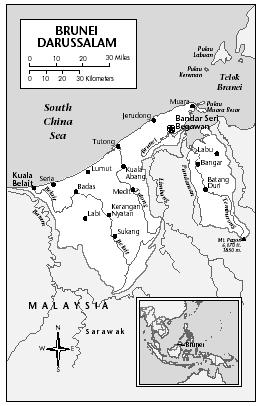 concrete talks to create what would be the world's largest free trade area, encompassing 1.7 billion people and trade valued at US $1.2 trillion. The free trade area is expected to take 10 years to implement but tariffs on some agricultural products could be cut by early 2003. Products covered by the early package include live animals, meat, fish, dairy produce, other animal products, live trees, vegetables, fruit, and nuts. Talks for trade in goods, services, and investments were due to be held in 2003.

On 16 December 2002, the Sultan met with US president George W. Bush, to strengthen trade between the two countries and to coordinate antiterror efforts in the wake of the 11 September 2001 attacks on the United States. The terrorist attack on a nightclub in Bali, Indonesia, on 12 October 2002 was also a warning that the Southeast Asian region is susceptible to, and perhaps a breeding ground for, the activities of international terrorist organizations.

Brunei, along with the People's Republic of China, Vietnam, Malaysia, Taiwan, and the Philippines, is engaged in a regional dispute over claims to the Spratly Islands, situated in the South China Seas, which are strategically important and may have large oil and gas reserves. In one of the most recent cases of friction, in August 2002, Vietnamese troops based on one of the Spratly islets fired warning shots at Philippines military planes. On the eve of the ASEAN summit held in November 2002, ASEAN leaders and China signed a declaration of conduct, agreeing not to attempt to occupy the Spratlys. The pact is not binding, but it is hoped that it will help ensure regional security.