The most significant environmental problems in Bhutan were soil erosion and water pollution. The erosion of the soil occurs because 50% of the land in Bhutan is situated on mountainous slopes which are subject to landslides during the monsoon season. Other contributing factors are overcutting of timber, road construction, and the building of irrigation channels. The nation has 95 cubic kilometers of renewable water resources, but only 86% of all city dwellers and 60% of people in rural areas have pure drinking water.

The Manas Game Sanctuary is located along the banks of the Manas River in southeastern Bhutan. Altogether, 21.2% of Bhutan's total land areas was protected as of 2001. In the same year, there were 20 species of endangered mammals including the tiger, snow leopard, Asian elephant, and wild yak, and 14 bird species were threatened with extinction, as well as five threatened species of plants and one endangered reptile. 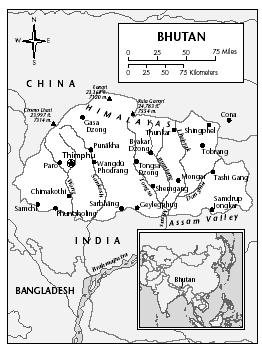 WHAT IS THE MOST POLLUTED CITIE IN BHUTAN,BANGLADESH AND INDIA? I AM DOING A REASERCH PROJECT FOR A FOCUS COUNTRY AND NEED TO KNOW! NOW!!! IT'S DUE ON THE 26TH WHAT AM I GOING TO DO!!??