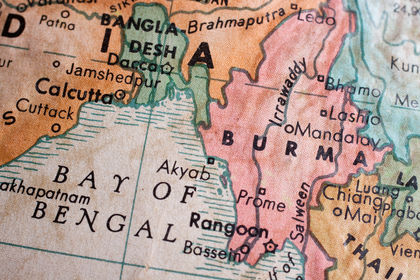 Situated in South Asia, Bangladesh, before it became an independent state, was the eastern province of Pakistan, known as East Bengal and, later, as East Pakistan. Bangladesh is slightly smaller than the state of Iowa with a total area of 144,000 sq km (55,598 sq mi), extending 767 km (477 mi) SSE – NNW and 429 km (267 mi) ENE – WSW . Bangladesh is bordered in the W , N , and E by India, on the SE by Myanmar (Burma), and on the S by the Bay of Bengal, with a total boundary length of 4,246 km (2,638 mi). A border demarcation agreement was signed with Myanmar in May 1979. Demarcation of the marine boundary with India remains unresolved. Bangladesh's capital city, Dhaka, is located near the center of the country.

Bangladesh is our country.I live in bangladesh.I love my country. It is a small country.
2
Shahjahan Russell

I love my country very much.i want to have peacefull life of all Bangladeshi who live in Bangladesh as wel as abroad."AMAR SONAR BANGLA, AMI TOMAY VALOBASI" -Thanks.
3
Shavonne

hi this website is the bomb! thanks for all your help, samee rubus gwilliam kahn. x
5
abigail smith

add my e-mail address please i am trying to find out about bangladesh for a case study, the more people from bangladesh that add me the better!
6
Barak osama

God bless Bangladesh it is good country wit many goot people I love many people they are very nice.
7
Anax

This article has some basic information on the area and length of Bangladesh, However if you just do a search on Google, regarding something more
You will have a set of articles to read. Read them all, good portals that I recommend you to read which are -
Newspaper sites and individual's research articles.
Thanks for uploading this here.
8
Fahim Ahmed Faisal

Thanks for publishing about Bangladesh so nicely. It's really an honor for us. Because I'm from Bangladesh. And this site is very good with these kind of stuffs. Thanking you for your website. One thing I would like to mention, the information you're giving that is wrong, I guess. The land area of Bangladesh, at present it is 1,47,610 sq km (56,990 sq mi)The country has an area of 147,610 square kilometres (56,990 sq mi) and extends 820 kilometres (510 mi) north to south and 600 kilometres (370 mi) east to west. Bangladesh is bordered on the west, north, and east by a 4,095 kilometres (2,545 mi) land frontier with India and, in the southeast, by a short land and water frontier (193 kilometres (120 mi)) with Burma (Myanmar). On the south is a highly irregular deltaic coastline of about 580 kilometres (360 mi), fissured by many rivers and streams flowing into the Bay of Bengal. Hope it'll be corrected. Thanks again.