The continuing trade deficit has been offset in small part by private transfers, mainly from earnings of workers in the Middle East, but large amounts of foreign aid and heavy short-term borrowing are needed to handle the balance-of-payments problem. In FY 1991/92, the infusion of $1.59 billion in foreign aid and transfers helped lessen a negative balance of payments. In 1995, the trade deficit widened and there was a stagnation in the growth of remittances from overseas workers. The rising trade deficit, coupled with a decline in international aid disbursements due to political turmoil, caused foreign exchange reserves to drop from a peak of $3.4 billion in April 1995 to $2.1 billion by the end of 1996, and $1.7 billion by 1999.

During the 1990s, the manufacturing sector revived, due to export growth led by garments and knitwear. Bilateral quota systems with developed country markets, whose quota regimes limited the exports of many competing Asian suppliers, were a factor in the growth of garment exports starting from 1994. Other factors contributing to the success of the garment industry in Bangladesh include few governmental regulations; the provision of customs-bonded warehouses for imported cloth; and financial arrangements allowing foreign banks to finance raw materials inventories. Nevertheless, Bangladesh must diversify its export base in order to improve its trade imbalance—garments and knitwear continue to account for 75% of export earnings. Leather and shrimp are potential growth sectors. The elimination of the quota system on textiles and clothing under the WTO was due to expire in 2005, and Bangladesh will need to improve the performance and quality of its garment export sector.

By the end of July 2001, the country's foreign exchange reserves stood at $1.05 billion, which was enough to pay for about a month of imports, the lowest level in a decade. Since the end of the 1990s, the level of worker remittances has increased at an average rate of 12.6%.

The US Central Intelligence Agency (CIA) reports that in 2001 the purchasing power parity of Bangladesh's exports was $6.6 billion while imports totaled $8.7 billion resulting in a trade deficit of $2.1 billion. The International Monetary Fund (IMF) reports that in 2001 Bangladesh had exports of goods totaling $6.09 billion and imports totaling $8.13 billion. The services credit totaled $751 million and debit $1.47 billion.

The following table summarizes Bangladesh's balance of payments as reported by the IMF for 2001 in millions of US dollars. 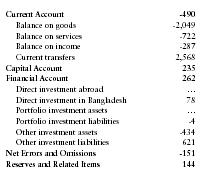 A sample research on Balance of payment of Bangladesh.