The budget is presented biennually and regularly updated, and represents a large section of economic activity. More than half of government revenues come from oil production and refining; the oil industry is completely controlled by the government. The public deficit is covered by internal borrowing, loans from Arab funds, and the IDB; although privatization has become increasingly important to controlling the budget. The oil and aluminum industries are still controlled by the government, although utilities, banks, financial services, and telecommunications have started to fall into private hands. 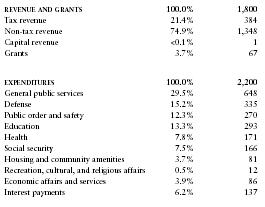