Traditionally, Bahrain relied on a substantial influx of funds from Sa'udi Arabia, Kuwait, Abu Dhabi, and Iran to finance capital outlays. In recent years, however, increased income from tourism and financial services, have placed Bahrain in a favorable payments position.

The US Central Intelligence Agency (CIA) reports that in 2001 the purchasing power parity of Bahrain's exports was $5.5 billion while imports totaled $4.5 billion resulting in a trade surplus of $1 billion.

Although oil imports decreased in the first quarter of 2001, there was a slight increase in non-oil imports.

The following table summarizes Bahrain's balance of payments as reported by the IMF for 2001 in millions of US dollars. 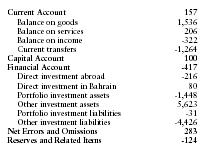 I NEED THIS INFORMATION BECAUSE EMERGENCY ASSIGNMENT. SO, ALL SLIDE SHOW NOW.
2
noor daavi

it is a very important information for my. it will help me to understand the (bop) of behrin.