Since 1996, the Azerbaijani government has emphasized privatization as a means towards consolidation of the public debt and revitalization of the economy. Over 70% of all parastatals are set to be privatized; more than 20,600 companies were privatized during 1997 and 1998. Foreign investment was encouraged, especially in the oil sector, however the diversification needed for long-term growth is lacking. The budget deficit in 2001 was a mere 0.5% of GDP.

The US Central Intelligence Agency (CIA) estimates that in 2001 Azerbaijan's central government took in revenues of approximately $786 million and had expenditures of $807 million. Overall, the government registered a deficit of approximately $21 million. External debt totaled $1.4 billion. 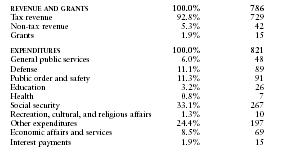