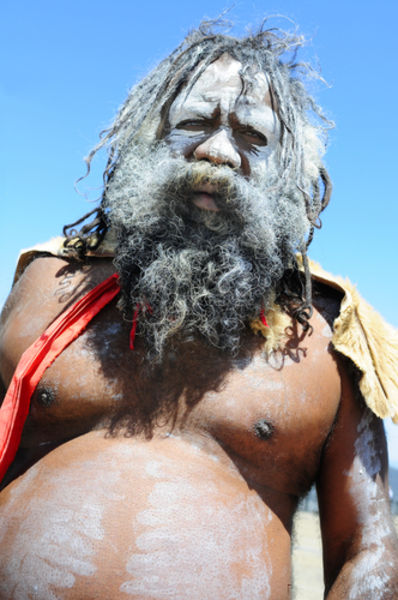 After the coming of the Europeans, the aboriginal population declined drastically, from about 300,000–1,000,000 to some 60,000 by the early 1920s. By the 1950s, however, the decline was reversed. In the 1991 census 265,492 people identified themselves as being of aboriginal or Torres Strait Islander origin, or 1.5% of the population. (Of these, the latter numbered 26,902.) Many of them live in tribal conditions on government reservations in the north and northwest; some 39,918 were in the Northern Territory in the 1991 census and 41,792 in Western Australia. Queensland had 70,130, and New South Wales, 70,020. Their social organization is among the most complex known to anthropologists. They do not cultivate the soil but are nomadic hunters and food gatherers, without settled communities. Anthropologists believe the aboriginals, also known as Australoids, are relatively homogeneous, although they display a wide range of physical types. Their serological, or blood-group, pattern is unique, except for a faint affinity with the Paniyan of southern India and the Veddas of Sri Lanka. The aboriginals probably originated from a small isolated group subject to chance mutation but not to hybridization. There seems to be a sprinkling of Australoid groups in India, Sri Lanka, Sumatra, Timor, and New Guinea. In 1963, aboriginals were given full citizenship rights, although as a group they continued to suffer from discrimination and a lower living standard than European Australians generally.

Beginning in the 1960s, the government abandoned its previous policy of "assimilation" of the aboriginals, recognizing the uniqueness of aboriginal culture and the right of the aboriginals to determine their own patterns of development. From the passage of the Aboriginal Land Rights (Northern Territory) Act in 1976 to mid-1990, aboriginals in the Northern Territory were given ownership of about 34% of territorial lands (461,486 sq km or 178,180 sq mi). The South Australia state government and its aboriginals also signed a land-rights agreement, and similar legislation was developed in other states during the 1980s. In all, aboriginals held 647,772 sq km (250,104 sq mi) of land under freehold in mid-1989 and another 181,800 sq km (70,193 sq mi) under leasehold. A reservation in Western Australia consisted of 202,223 sq km (78,078 sq mi). By the mid-1990s, however, more than two-thirds of the aboriginals had left rural lands to settle in urban areas.

thanks for the great information that this article has provided me it is going towards helping mme with an Australian project. So thanks again!
2
Faimafili Village Resort

important information for my research. it is very useful and str
aight foward to my point of view.I'm very proud to use this information to get some points for my research. It is good to study these stuff so that I know how other countries's averageof visitors go. I really want to keep this article for me to refer back to.